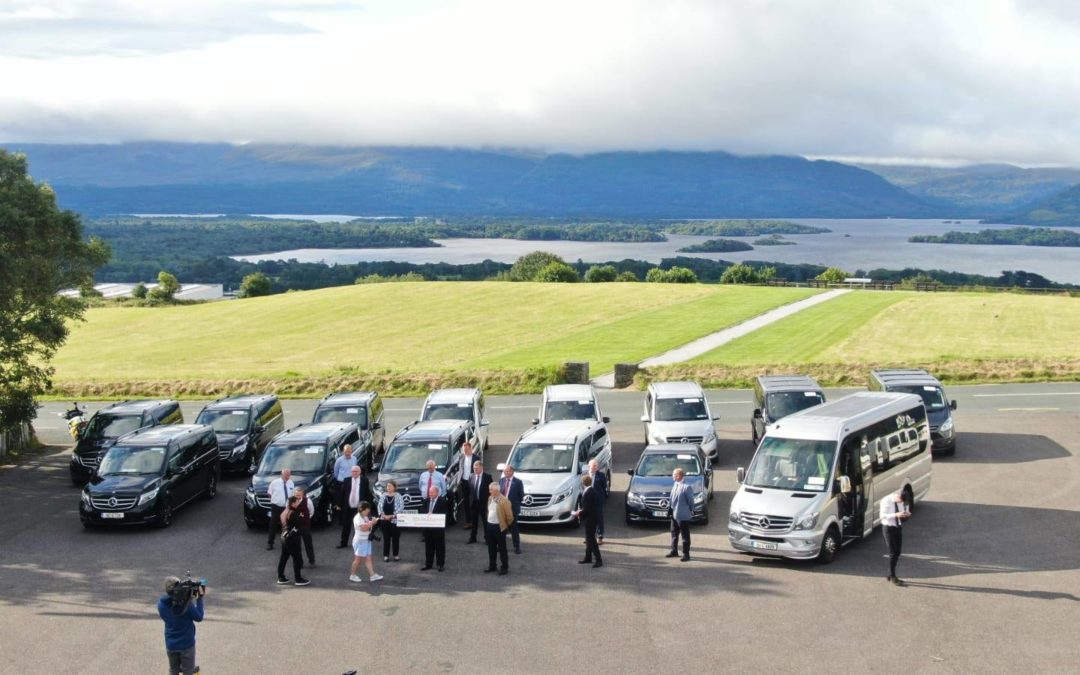 DRIVE TO SURVIVE: More than 50 chauffeur drivers and tour bus operators, including several from Killarney, took part in a drive along the Wild Atlantic Way last weekend to highlight their concerns over their loss of business as a result of COVID-19 restrictions.

Coach and tour operators in Killarney say their contribution to the tourism sector has been overlooked by the Government’s July stimulus package.

O‘Callaghan Coaches, which last year celebrated its 50th year, say they are facing huge challenges as they try to get back on the road.

Their main business is providing coach tours, either to incoming foreign visitors or by bringing locals on pilgrimage to Lourdes or Christmas shopping trips to Dublin. This week should have been particularly busy with Galway Races.

Despite the lack of any income they are still obliged to carry out annual road worthy tests on their 30-strong fleet at a cost €400 per vehicle; they continue to pay insurance, and despite a moratorium on vehicle loans they are still paying interest on them.

Currently they have around 50 part-time and full-time drivers who are out of work.

“We have been completely parked up since March,” Phillip O’Callaghan told the Killarney Advertiser. “There is no domestic market. Even in the last recession we still had 30 or 40 percent of our business but now we have nothing.”

Mr O’Callaghan is calling for further Government support to help the ailing sector.
He says coach operators are an important link in the whole tourism-economic package and their contribution is being overlooked.

“We bring people to places like the Gap of Dunloe or the Red Fox Inn and our customers could spend €5 or a €100 in each location,” he said.

The Government did grant a €10 million Business Continuity Fund to coach operators as part of its July stimulus package but by the time that is divided up between all operators there won’t be much left to go round.

The Coach Tourism and Transport Council of Ireland estimate there were 1,721 private operators in Ireland last year. That would leave just over €5,800 per operator and, as an example, that would allow O’Callaghan Coaches claim €193 per vehicle – assuming they would get the full €5,800 – which won’t cover the annual test for each vehicle.

“Those funds are with Fáilte Ireland and even they don’t know what to do with it,” Mr O’Callaghan added.

Meanwhile, more than 50 chauffeur drivers and tour bus operators, including several from Killarney, took part in a drive along the Wild Atlantic Way last weekend to highlight their concerns over their loss of business as a result of COVID-19 restrictions.

The ‘Drive2Survive’, organised by the Western Chauffeur Drive Association left Killarney on Friday in convoy for the three day road trip along the west coast stopping at visitor and heritage sites along the Wild Atlantic Way including Bunratty, the Cliffs of Moher, Galway, Salthill, Maams Cross, Leenane, Ballina, Sligo, finishing in Donegal.

Local operators took part in the Kerry leg of the trip. They included Pat Buckley. He and his son Patrick own and operate Personal Tours Ireland and rely on the American tourist market to survive.

They have had very limited business since last October, the traditional end of the tourism season. Business usually picks up in March ahead of the busy peak months of July and August but the rug was pulled from under them at the start of the national shutdown.