Track and Field of Dreams: How an ambitious goal became a reality 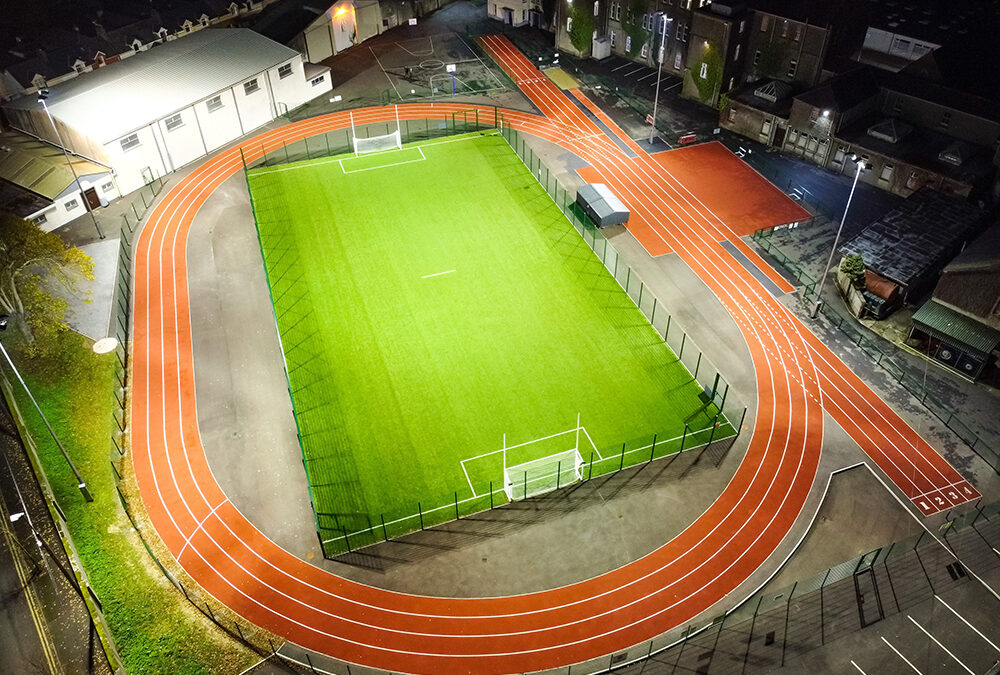 After years of planning and hard work, the lights have finally been switched on at the Killarney Valley AC Arena. This week Killarney Valley coach and committee member Tomás Griffin tells Adam Moynihan how the club’s big dream became a reality.

Tomás Griffin: Thanks, Adam. We’re really, really proud of it. We hope that it’ll allow us to grow the athletics club, and also benefit the broader community in whatever way we can.

I know it has been a long process for the club. Can you tell me where the whole concept came from?

The idea really started with my brother, Jerry, about 10 years ago. He deserves an awful lot of credit for keeping people energised and involved when we thought that it couldn’t be done. I must also mention Cathal O’Brien who has worked tirelessly behind the scenes since Day 1. There were lots of hurdles.

Killarney Valley Athletics Club (formerly Spa/Muckross AC) rebranded around seven years ago. Prior to that, Jerry and Bríd Stack and Jean Courtney and Con Lynch would have been doing a lot of the coaching, based in various GAA pitches that they could get some time on. The club was just bouncing along really. Some great athletes were produced but some would have moved to other clubs because facilities are important.

That’s where the idea came from. Let’s build a facility of our own, and then we’ll have a better chance of developing the sport beyond juvenile level.

So, what came next?

The next step to take it from a dream to a possibility was land. Where could we possibly find a place to put a facility? And the type of facility you can build is dictated by the land that you can acquire. The gold standard ambition is to have a full 400-metre Olympic standard athletics track but the reality is that you’d need an enormous amount of space. Based on property prices in Killarney, the club could never acquire that kind of land.

The idea of having it as a smaller facility and squeezing it in some place started to evolve. The committee had conversations with a couple of other sporting organisations and we wanted to partner with them, but really other clubs were reluctant to allow that happen, which was fine. We had to move on from the idea of putting a track around what other clubs had.

How did the final location (alongside St Brendan’s College on the New Road) arrive on the table?

A fortunate conversation with St Brendan’s and Principal Seán Coffey came about because a few of us, including Jerry, are past pupils of the Sem and we knew that there was a piece of ground inside there that was gone to waste. There were dilapidated outdoor basketball courts and a green area that was not being used for anything.

Seán suggested that we could maybe form a partnership with St Brendan’s Trust, which is essentially the church, who own a lot of the land. Killarney Valley AC had been renting St Brendan’s Hall for indoor training in the wintertime and we thought that maybe we could do something different here.

Fill me in on the financial side of things. How much did the project cost?

The total project from start to finish is after costing €520,000. There were lots of challenges along the way. Firstly, it took longer than we were anticipating because of weather. When you’re laying a track you need temperatures to be a certain level. You also need very little rain, which is always going to be a challenge. There were other delays as well with trying to get contractors lined up, so all of that would have escalated the price.

The original plan and the original projection was that it could be done for around €350,000. That changed because of the delays. Our ambition was always just to have the athletics track but the astro turf came in and changed the projected price to €520,000.

How did the fundraising go?

We managed to raise €400,000 in total. Through our own fundraising, which was done through GoFundMe pages and local businesses who pitched in behind the scenes – and we’re going to name and thank those businesses in an organised way over the next couple of months – we generated around €200,000. A lot of effort went into that.

The balance came from Sports Capital funding, County Council funding and Leader funding. We also got a donation from the Tomar Trust, which supports community-based projects that are being done for the right reasons.

So, we’re still left with a gap of €120,000. We’ve just relaunched our GoFundMe page with new video footage of the place now that it’s finished. 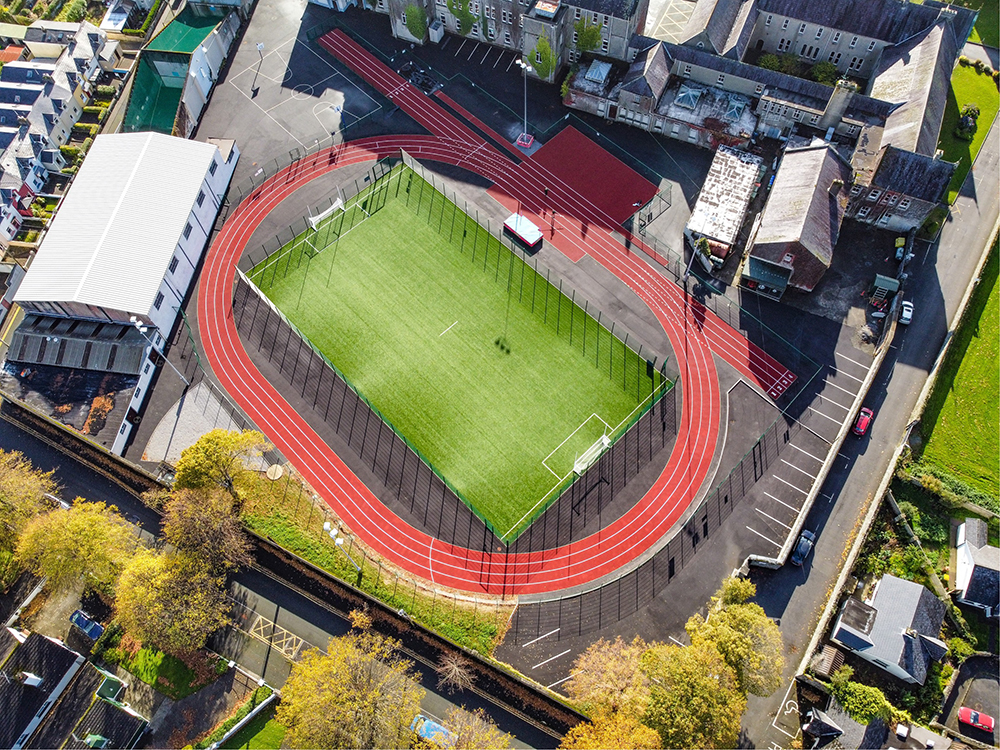 The arena itself is a sight behold. How long is the track?

The fact that it’s a 200-metre track instead of a 400-metre track could be seen as a challenge but we’ve made sure that the bends aren’t too tight. The track itself is a permeable surface so water just drains straight through. It’s cushioned, so it’s a really lovely surface to run on. Another interesting point is that, as we know, the wind has an enormous influence on sprints. 99% of our winds are southwesterly, and our sprinting straight will benefit from southwesterly winds. That took thinking and planning.

We have an Olympic standard high jump set-up that is possibly, based on what I’ve seen around the country, the best in Ireland. Our long jump run-up is 50 metres long, which is Olympic standard, and the pit is 9 metres – the world record is 8.95 metres, so we’ve left five centimetres for someone to break it!

We’ve managed to cover off every discipline that you could possibly need to do, and we squeezed it into half the space that would normally be available.

And the pitch is available to rent?

Yes. Because we’ve got the debt, we need to address it and astro turf rentals are a way to do that. Insurance is very important so anyone who wishes to rent it has to provide their own insurance, which effectively means clubs. If a random group wish to rent the pitch they can, but they need to buy standalone insurance and we can help them get that.

There has been huge interest so far – we have very limited hours left. We’ve had good support from local clubs who needed an extra place. It’s 55 metres long and 32 metres wide, so it’s plenty big enough for seven-a-side or even 10-a-side for juvenile teams. The surface is top class.

But it brings another challenge. There are running costs, there are maintenance costs, there are insurance costs… That requires co-operation and understanding from the broader community as well. The track will wear out. The pitch will wear out. We need to be free of our debt so that we can invest all the money from the rentals into a sinking fund, so that in 10 years’ time when the track wears out – and we hope it does wear out because that means it’s being used – we’ve got the money to resurface it. The same goes for the pitch.

It’s not a business. We’re just a committee of people who want the facility to live forever.

How beneficial will the track be for Killarney Valley AC moving forward? It must be an exciting time for the club.

It is. We managed to open the place and turn on the lights during the pandemic, and facilitate the groups that are allowed to train. That, in itself, has been exciting.

In the past, we were very limited in what we could do. As a result of that, your skill levels as a coach get limited also. For us as coaches, the new facilities will allow us to up our skill levels, which will be very important. This in turn will feed into the ambition of the club. Our end goal, which is on the horizon already based on all the youth athletes that have been turning up to training, is that within a 24-month period, and hopefully by next summer, we’ll have a men’s team in the National League of athletics.

Keeping girls involved is a challenge and our way of addressing that is to also set the goal of having a female team in the National League of athletics, probably within 36 months.

And the arena isn’t just for Killarney Valley AC…

It isn’t, and this is a very important thing for the public to know, especially people who may not have any involvement with athletics or may never have any intention to get involved. All of the schoolchildren in Killarney, through their schools in a managed way, have free access to our facility from 8.30am to 4.30pm during the school term.

There are approximately 3,000 schoolchildren in the Killarney area, the majority of whom are within 500 metres of the facility. That’s a huge amount of people that we can expose to a sport that they might not have otherwise decided to get involved in.

We may find our next Olympians, but that’s not what it’s about. It’s about helping people get active.

Just to clarify for people who may not be familiar with the set-up: although it’s located adjacent to St Brendan’s College, this is Killarney Valley AC’s facility, and St Brendan’s have access to it in the same way that every other school in the vicinity has access to it. Is that accurate?

That is exactly the situation. We would like to see a relationship evolve between the schools over time so that everyone will have a fair shot at using it, and it won’t be St Brendan’s using it 100% of the time.

One thing we can’t facilitate, though, is just leaving the gate open – that would never work. Everything that happens there will be on a managed basis, but there will be plenty of community-based stuff going on in there.

People can also join the club and not be a competitive athlete, and we’ll be able to put on training for these people too. We’ll be deciding on a membership fee shortly and an announcement will be made.

We will also be doing things like Couch to 5Ks for people in the local community who just want to get active. Keep an eye on our social media for updates on that.

Great stuff, Tomás. Congratulations again, and all the best with the new facility.