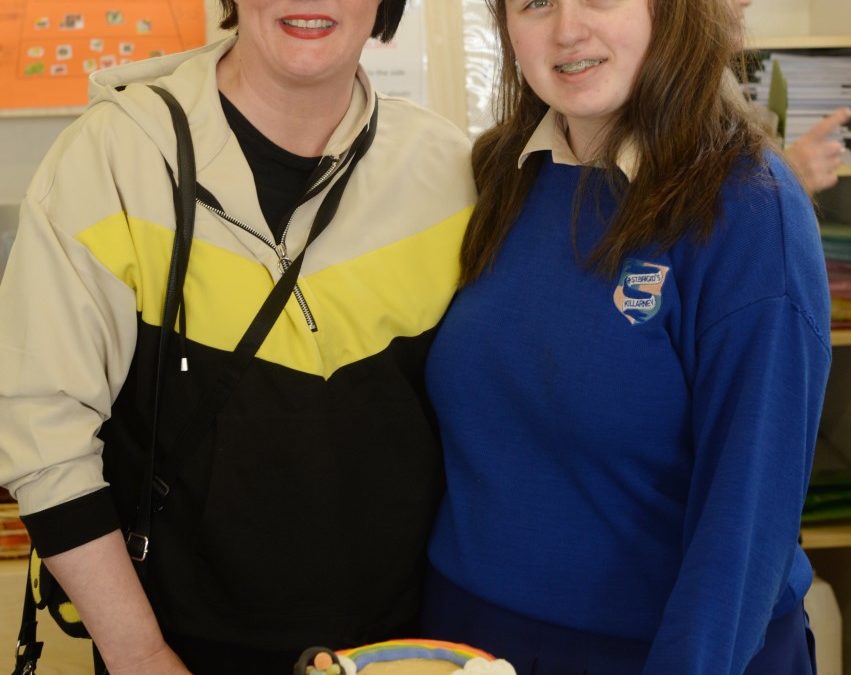 THIRD PLACE: Laura Looney, a Fifth Year student in St Brigid’s Presentation Secondary School, pictured with her mom Karina, finished in third place in the senior category of the Ceist All-Ireland bake off.

A Fifth Year student in St Brigid’s school served up such a treat that she secured third place in the senior category of the Ceist All-Ireland Bake Off recently.

Laura Looney was one of seven senior students shortlisted from CEIST schools throughout Ireland to take part, and wowed judges at the bake off in Ardscoil na Trionoide, Athy, Co Kildare on Friday, March 6.

Each student had three hours to bake and decorate their masterpieces to reflect the theme of ‘Community’, and the standard was exceptionally high.

The judges on the day were Edward Hayden from TV3 and a local baker. The cakes were judged under three criteria: taste, texture and appearance. Laura, who baked a delicious three tier coffee cake, which she decorated with piped buttercream icing in an array of colours, based her cake on LGBTQ+.

“When I heard of the competition many ideas filled my head from my school and rowing club,” Laura, who is baking since she was aged six, said.

“I then thought of some of my friends who are members of the LGBTQ+ community. I felt it was a way to honour their courage. When they called my name for third place I became speechless.”

Her Home Economics teacher, Catherine O’Donoghue, who organises the St Brigid’s Bake Off, said that the school is so proud of her.

“It is such a fantastic achievement. We have such amazing talent in our school and winning our school bake off in February was an achievement in itself. However, this is another level again.”