Ryanair to be grounded by tomorrow (Tuesday) 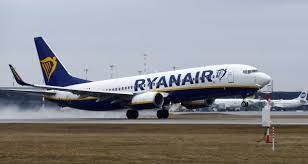 Ryanair is expected to ground all but a very limited number of its aeroplanes by tomorrow (Tuesday) in an effort to stop the spread of Coronavirus in Europe.

The airline started grounding its fleet on Thursday last and by tomorrow (Tuesday) only a handful of flights will serve unspecified Ireland to UK airports.

Ryanair operates flights to several European destinations from Kerry Airport. These include daily services to London Stansted and London Luton as well as frequent connections to Berlin and Frankfurt in Germany. A new twice-weekly flight to Manchester was due to commence at the end of March.

‘By Tuesday, March 24 we expect that most of, if not all, Ryanair Group flights will be grounded, except for a very small number of flights to maintain essential connectivity, mostly between the UK and Ireland’, a statement issued by the airline said.

Borders have been closed throughout Europe and there is no indication when travel restrictions will be lifted.

Kerry Airport did not respond to a Killarney Advertiser request for a statement on the current crisis.