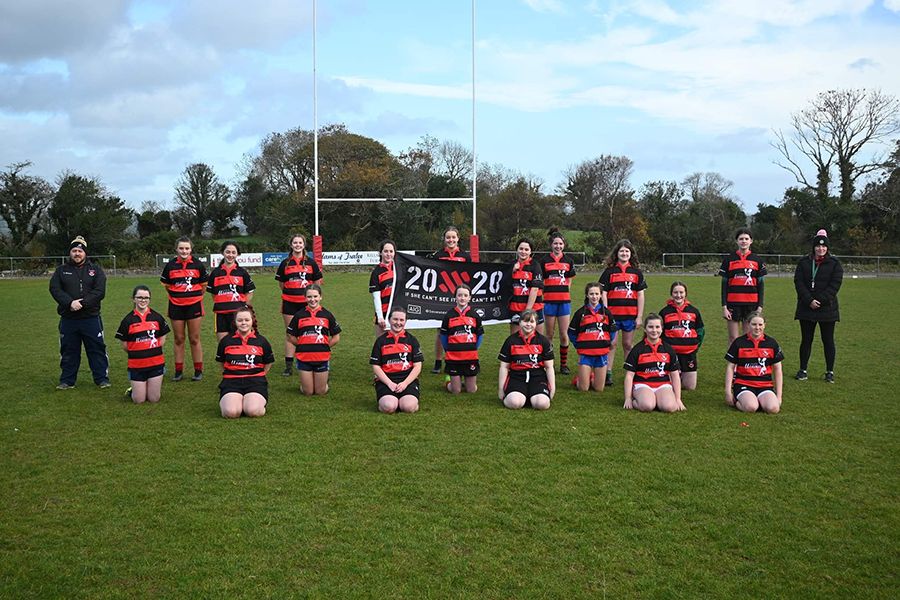 It’s a case of onwards and upwards for Killarney RFC’s female players as the club have announced this week that they have signed up to the inspiring 20×20 initiative aimed at promoting and keeping girls and women in sport.

Coaches and players recently came together at their Aghadoe base to celebrate the announcement and also to unveil the new kit that will be worn by the girls during the forthcoming season.

Speaking to the Killarney Advertiser, Minis (U6-U10) co-ordinator Liam Murphy says that the progress being made by the girls’ teams has already exceeded the club’s initial expectations.

“It really has come on leaps and bounds since 2018. That’s when Killarney RFC members came together to discuss and formulate a three-year plan to develop youth girls’ rugby, with the aim of fielding an U14 girls team by 2021.

“Thanks to the full backing of the club, as well as the enthusiasm of the players, parents and coaches, we now boast an U14, U16 and a fledgling U18 team.

“We are delighted to have support from Munster Rugby who regularly send coaches to us for training sessions.”

Numbers have grown exponentially over the course of the past two years and there are now over 60 girls aged five and up attending weekly sessions at the club’s wonderful facility at Aghadoe.

“It is truly amazing to see the progress being made in girls’ rugby right across the club,” Liam says. “This is especially fantastic given the fact that very few, if any, of the girls who are now playing rugby had any rugby experience to start with.”

The club’s commitment to promoting the girls’ side of things has been reaffirmed by signing up to the 20×20 charter and Liam says that Killarney RFC were “delighted” to do so.

“For us as a club, the 20×20 initiative is so important in encouraging girls to play sport and in particular rugby. With our girls’ section flourishing it is also vital for the girls to receive the recognition they deserve.

“These girls can be the role models for younger players coming through.”

The work being done behind the scenes across all underage male and female teams was acknowledged by Munster Rugby this past week when Killarney RFC won the prestigious Youth Section of the Year award.

If you have a daughter, a sister or a friend who may be interested in playing rugby, the club invites you pop along to training or reach out to any of the club’s co-ordinators. Training takes place every Wednesday evening at 6.30pm for the U14, U16 and U18 teams and on Saturdays from 10am for Minis (U6 to U10).