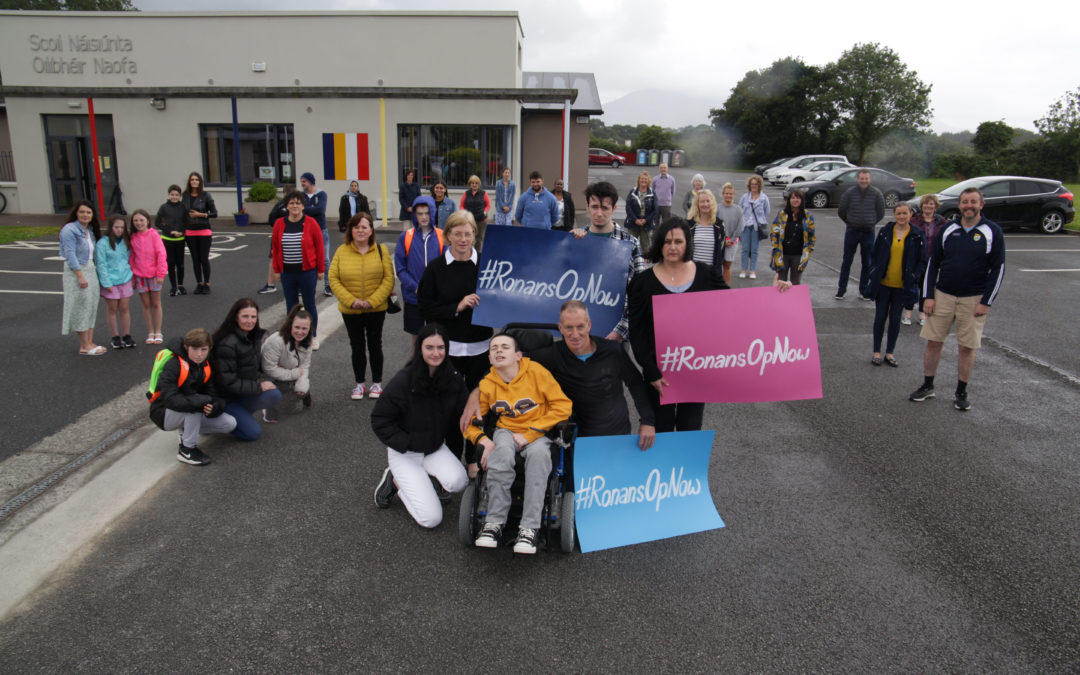 A huge social media drive – which includes a video filmed at a local Killarney school – has clocked up over 200,000 views in days – in a bid to put pressure on the HSE for urgent surgery for local lad Ronan Foley – who is suffering from scoliosis.

In 2018 he had a 42 degree curvature of the spine which significantly worsened to 79 degrees within a short space of time. Now it’s at a 90 degree curve in his spine and Ronan’s family were promised that he was priority for surgery but is still waiting two years later.

He is in constant pain as his condition has deteriorated so much. He finds it hard to sit up for short periods, while travel to and from Dublin for appointments in Crumlin hospital leaves him is agony.

School staff who taught the 14-year-old for many years, gathered with Ronan and his family as local photographer Ian Cronin filmed a video outside the school to highlight his plea on a national level.

Deputy Michael Healy-Rae this week told the Killarney Advertiser that he is keeping the pressure on the HSE regarding Ronan Foley’s case.

As late as Wednesday this week he said that he had received correspondence from the HSE and that he has been in touch with Ronan’s father Tony.

“The new Minister for Health Stephen Donnelly came back to me and said that he’s looking into it,” Deputy Healy-Rae told the Killarney Advertiser.

“No child in our country should be left in agony like this,” he said, saying especially as it’s something that can be solved with surgery.

“The boy is in pain and I’m ashamed that we’ve a health system that allows someone in pain when he doesn’t have to be. Hopefully we’ll have some good news soon.”

Last week the Killarney Advertiser reported on Ronan’s case and it was shared out online over 200 times via Facebook. TD Michael Healy-Rae raised Ronan’s case in the Dáil, while new Minister for Education Norma Foley has also promised to look into it.

“We’re delighted with the traction it has gotten so far,” Noel O’Sullivan, who works at St Oliver’s and put the final video footage together, told the Killarney Advertiser.

“All we’d ask is to appeal to people to share the video and promote the campaign so it gets the kind of numbers that will get national attention. We’re hoping this will put pressure on the HSE to discourage them from postponing Ronan’s operation yet again.”

Josephine Doncel, who taught Ronan, said that they’re very grateful to have Ian Cronin help produce the video and get the excellent footage with his drone camera.

“We were also lucky enough to have Irish actor Frank O’Sullivan narrate the story so effectively in the video and we appreciate him giving his time to do this for Ronan.”

But of course Ronan is still waiting and there is no end in sight for him. His parents, Tony and Caroline, are finding the lack of transparency and information on what is happening with his operation particularly distressing.

“It is amazing in such a large organisation like the HSE or even Crumlin hospital itself no one can tell them where he is on the waiting list and how he has gone from being scheduled for the operation on March 12, to it being cancelled six days before he was to have it and now not having any idea when the operation will be. We need the help of everyone to support our social media campaign and to call on the powers that be whether they are politicians or the HSE to arrange for #RonansOpNow.”