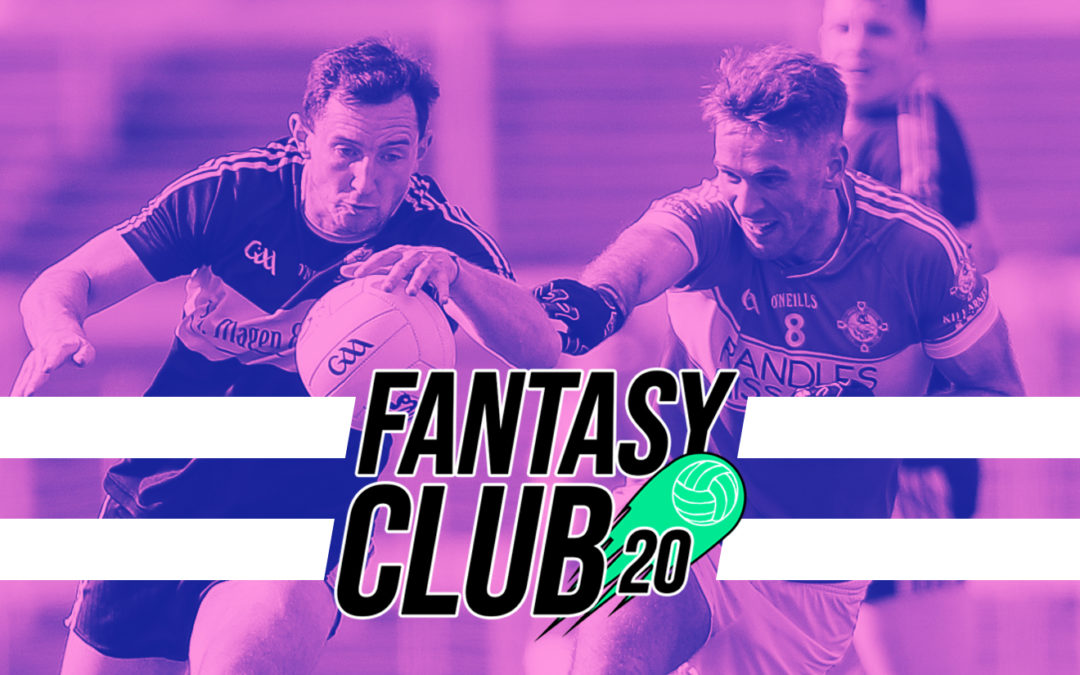 The coronavirus pandemic delayed the start of the Kerry Senior Club Championship but now it’s back on, and so is the Killarney Advertiser Fantasy Club game in association with Gaelic Plus.

In March we unveiled plans to set up a revolutionary new fantasy football game based on the local Club Championships and today we are delighted to announce that the project is going ahead with some fantastic prizes on offer for the top performers.

Participants will be tasked with selecting their dream line-up of players from the county’s eight senior clubs, namely Killarney Legion, Dr Crokes, Austin Stacks, Kerins O’Rahilly’s, Dingle, Kilcummin, Templenoe and Kenmare Shamrocks. Fantasy points will then be earned based on the players’ performances in real life, with the top managers earning prizes at the end of the tournament.

The entry sheet, rules, scoring system and pool of players can be found below. The closing date for entries is July 22, three days before the Club Championship kicks off on July 25.

The format will be similar to the one used in the popular Fantasy Premier League game which is played by 7.5 million people worldwide. It is believed that Killarney Advertiser Fantasy Club will be first competition of its kind at club level in the GAA.

Killarney Advertiser Sports Editor Adam Moynihan first floated the idea back in March and it received an overwhelmingly positive response from his Instagram followers (@adammoynihan). News that the competition is back on has once again been greeted with enthusiasm.

“I’m thrilled that we’re getting the opportunity to run Fantasy Club this year,” Adam said. “It was looking unlikely there for a while but thankfully sport is back, and the return of the Club Championship means that we can finally go ahead with our plans.

“Unfortunately, as I was saying before the break, we’ll have to limit the amount of participants so it’s very much a case of first come, first serve. Many people have already booked their spots via my Instagram and by email so spaces are filling up fast.

“Send a scanned copy (or a very clear photo) of your entry sheet to sport@killarneyadvertiser.ie ASAP to avoid disappointment.”

Adam was also able to reveal the prizes that will be on offer courtesy of tournament sponsor, Gaelic Plus.

“Shane Cronin at Gaelic Plus has put up some great prizes and we’re very grateful to have him on board,” Adam said. “Third place will win a Gaelic Plus-branded hoodie, training jersey and leisure shorts, our runner-up will win 20 pairs of club-crested football gloves, and the overall winner gets the grand prize: a set of 20 jerseys for his or her GAA club.”

The first 100 names will be guaranteed entry to the competition proper and the remaining names will be added on a first come, first serve basis, depending on how may entries are eventually accepted.

Print this form and follow the instructions to enter. Good luck! 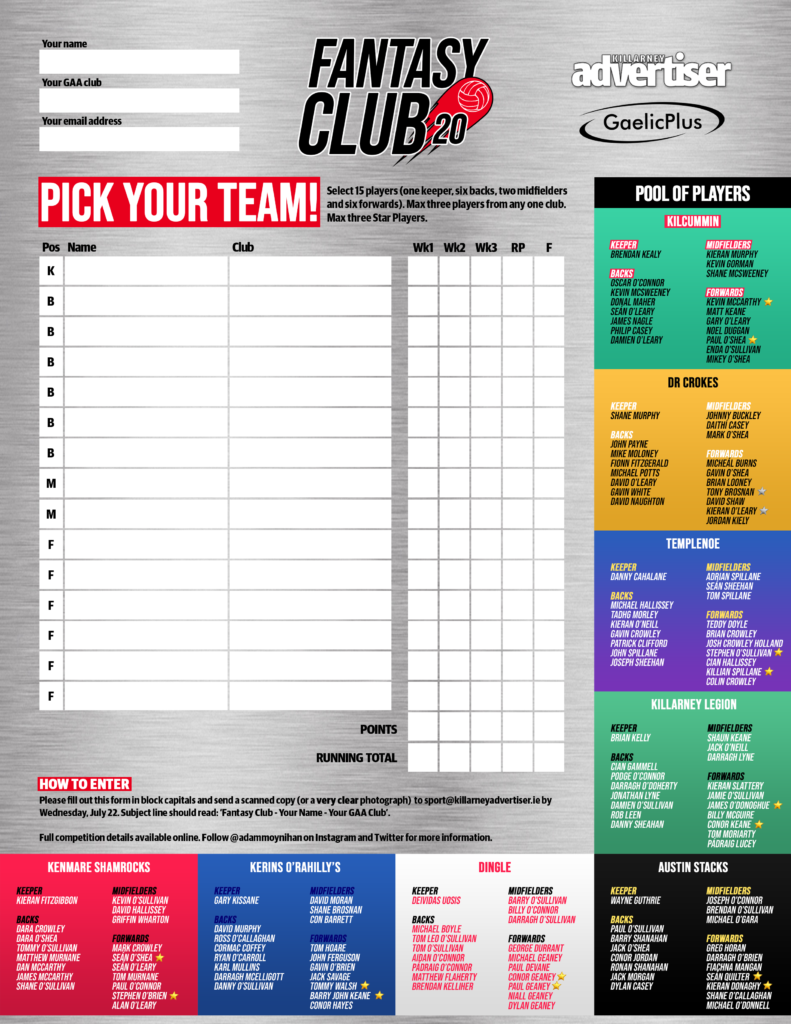 Please fill out form in block capitals. Send a scanned copy (or a very clear photograph) of your entry sheet to sport@killarneyadvertiser.ie by Wednesday, July 22. The subject line should read ‘Fantasy Club – Your Name – Your GAA Club’.

The first 100 entries are guaranteed their place in the competition. Remaining names will be added on a first come, first serve basis depending on how many participants are accepted. Entries found to have broken selection rules will be deemed void. One entry per person.

Managers cannot make changes to their teams once entry forms have been submitted. Injured or suspended players cannot be replaced.

Your Fantasy Club players will earn points based on their performances in all matches in the 2020 Kerry Senior Club Championship (group phase, relegation playoff and final). Points will be calculated to the best of the organiser’s ability based on all available evidence.

If a keeper lines out outfield, he will earn points based on the position he plays for the majority of the match.

If an outfield player starts in goal, he will earn the points of a keeper for that game.

All players who start in a given match earn 1pt. All starters and used substitutes can earn points for winning a match (3pts) or drawing a match (1pt).

Keepers will be awarded a clean sheet if they play for more than one half of the game and their club does not concede a goal for the entire game (excluding extra time and penalties).

POINTS FROM PLAY/PLACED BALLS AND GOALS

Any player can earn points in this category, regardless of whether or not they start. Goals and points scored in extra time also count.

Goals are worth the same amount from play and from placed balls.

Players will be deducted five points for receiving a red card. This includes straight red cards or any combination of cards which results in a red card. Red cards received by players who are not on the field of play will also lead to a points deduction.

If there is still a tie, the manager whose Star Players have scored the most points over the course of the tournament will be declared the winner.

If there is still a tie, the manager who led going into the last match of the tournament will be declared the winner.