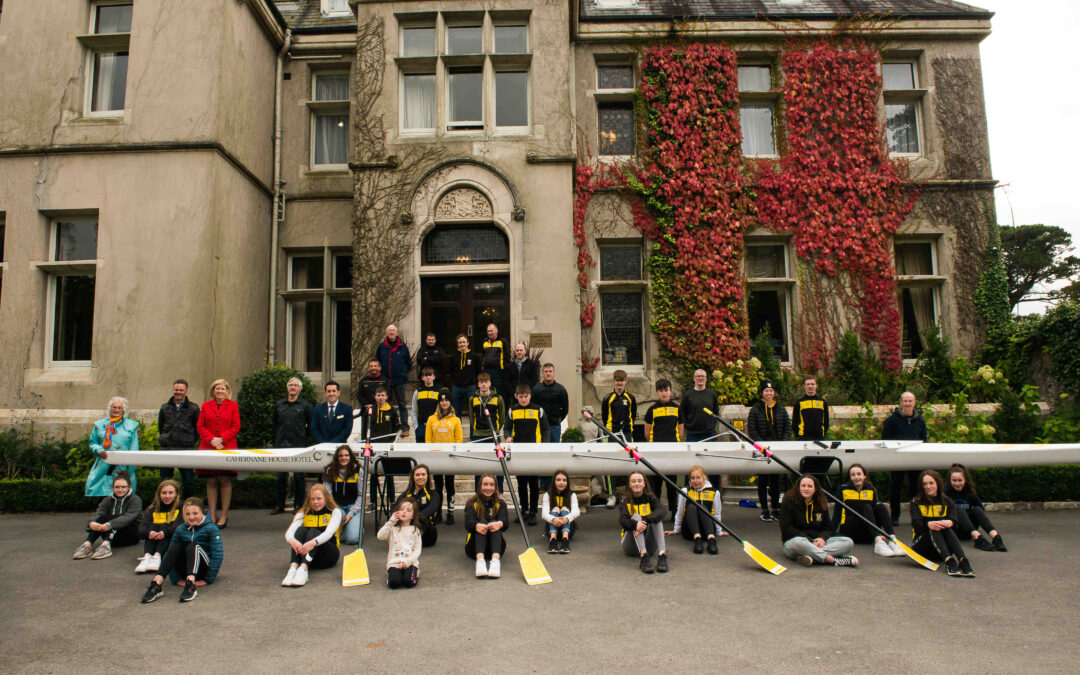 Cahernane House Hotel has partnered with Muckross Rowing Club and sponsored the latest addition to their collection of Olympic style boats – a new Janousek quadruple scull.

And it’s being named in honour of Club Vice President Kathleen Murphy. The committed involvement of the Murphy and Kenny families in Muckross Rowing Club has been central to the success of the club across generations. A number of Kathleen and Jerry’s children and grandchildren are counted among the club’s successful rowers, coaches and committee members up to the present day. Kathleen has also been unwavering in her fundraising efforts for the club, driving the success of the local community lottery on a weekly basis since the early 1990s. Kathleen and her late husband Jerry will forever stand among the club’s greatest supporters with a proud family involvement in Muckross RC. The club is delighted and privileged to name its new boat in honour of Kathleen.

The sponsorship renews a historic connection between Cahernane House and rowing in Muckross.
The Herbert family lived at Cahernane since purchasing the estate from Colonel Maurice Hussey in the early 1700s. The house passed through three generations of Herberts when Richard Townsend Herbert inherited the estate of the Cahernane from his great uncle Arthur Herbert who died without children years before.
In 1841, Richard’s younger brothers, Henry, Edward and Thomas took part in a Killarney – Cambridge four-oared boat race on the lower lake of Killarney. They won 10 pounds from Henry Herbert of Muckross for drawing such accolade on the locality. This started a connection and tradition between the Herberts and rowing.

The history of Muckross Rowing Club dates back to the 1800s, though a written record for the club’s founding year remains elusive to this day. The Kerry Evening Post of July 311895 records the presentation of the club’s third boat – a six-oar racing gig – by Henry AK Herbert.

The club is the oldest of the Killarney rowing clubs and holds a claim to being the oldest surviving rowing club in Ireland. The tradition of rowing in Killarney pre-dates the GAA and in 2019, the town held its 234th annual regatta for six-oar boats which are now unique to the town.