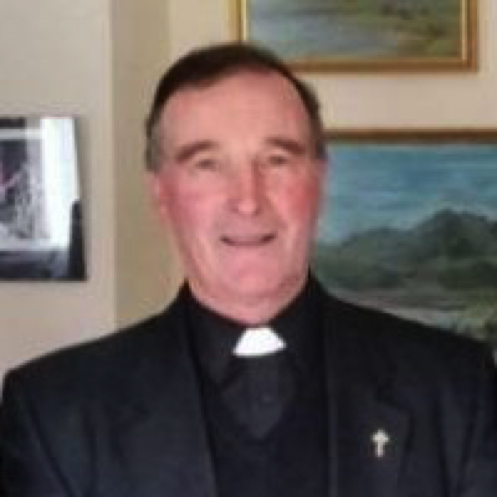 Fr Michael O’Donoghue, who is originally from Tiernaboul, has celebrated 50 years in the priesthood in his adopted home of Newark, Nottinghamshire, England.

Following a conversation with the then Dean of St Brendan’s College, Monsignor John Moynihan five weeks before his Leaving Certificate exams in 1964, Michael decided to enter the priesthood.

In September of that year, he and 65 other first-year seminarians joined All Hallows Missionary College in Dublin.

“There were 201 other students covering a six year period of training, all dressed in black soutanes and Roman Collars – a big change from playing football in Keefe’s Field in Spa,” he told the Killarney Advertiser.

On completion of his studies a toss of a coin decided his future. He was offered a choice of joining Kerry missionaries in either Sacramento, California or Nottingham.

“I had not given a future much thought so I eventually tossed a coin and it was heads for Nottingham,” he added.

After Ordination in the College Chapel on June 14, 1970 he was appointed to St Joseph’s Oakham as Assistant Priest to Fr Michael Lynch from Longford.

Four years later he was sent to England for the first time, to the parish of St Alban’s in Derby, where he served 54,000 people living in one housing estate.

In 1980, he was appointed Director of Youth Services for the Nottingham Diocese, covering the counties of Derbyshire, Nottinghamshire, Leicestershire, Lincolnshire and Rutland.

Late last year he was installed as the Honorary Canon of St Barnaba’s Cathedral in Nottingham by Bishop Patrick McKinney.

A special celebration was due to take place last week but pandemic restrictions prevented it going ahead and instead he celebrated with an online ceremony that was broadcast live from St Barnaba’s Cathedral in Nottingham.

“My personal Golden Jubilee of Ordination fell on Sunday, June 14. Holy Trinity Academy had plans in place for Friday 12 to involve our parish children and parents. The sick and housebound were being invited to a Service of Anointing and Holy Communion on Saturday 13, with a final flourish of invited guests to a Sunday evening Mass led by Bishop Patrick McKinney, Bishop of Nottingham, followed by a party for guests and parishioners,” he said.

“Like many other events, those plans fell by the wayside when COVID-19 raised its ugly head. But it was so good to be able to livestream the Jubilee Mass on the day. Many people participated virtually including my family members who had planned to be here for the occasion.”

Fr Michael is still a regular visitor to his hometown, the Kelliher family in Tiernaboul and the O’Donoghue family in Coolcaslagh are always on his visiting list. His sister Margaret lives in Lombardstown, Cork and is married to the son of a Minish man, Donie O’Sullivan, and his brother Sheamus lives in Ballycasey, Co Clare and is married to Margaret O’Dwyer from Templemore Co Tipperary.

He is an accomplished golfer and former track and field athlete.

“The days of cross-country running in the fields of Killarney may be the memories of youth, but 18 holes whenever the opportunity lends itself keeps the competitive heart beating away and the spirits high, as well as being able to come home on holiday and spend home-from-home time with my brother Sheamus and his family and my sister Margaret and her family.”