Killarney preparing for the Italian job 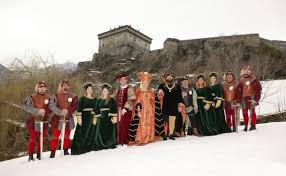 Killarney preparing for the Italian job
Killarney is extending the hand of friendship to the bustling village of Verrès in Italy with an open invitation to its community leaders and interested citizens to participate in the town’s 2022 St Patrick’s Day parade.
Strong links between the two locations were forged last year when Killarney architect, Davide Mosca – a native of Verrès– returned to his home place where he was chosen to lead the festivities for a four-day Mardi Gras style festival, Carnevale Verres.
It effectively saw Davide being crowned king for Italy’s version of the St Patrick’s Day celebrations in the Aosta Valley village of Verrès, to the north-west of Turin.
In February of last year, close on 50 people from Killarney travelled to Italy to join the celebrations, including St Patrick’s Festival Chairman Paul Sherry, and Davide Mosca was crowned Count Pierre of Verrès or the festivities.
Now Killarney’s festival organisers have invited the people of Verrès to visit next March with both communities anxious to establish cultural and educational links.
“We would love to have them visit us. They were wonderful hosts in 2020 and they are very interested in Killarney. We would be delighted if they participated in next year’s parade,” said Paul Sherry.
According to legend dating back to the 1400s, the Count and Countess left Verrès Castle to join locals in a pre-Lent village celebration and the colourful tradition has been upheld since then, with one native son invited to play the role of the Count every year.
Davide Mosca, a graduate of the University of Politecnico di Torina, has been living in Killarney for over 20 years. He is the third member of his family to be honoured as Count Pierre in Verrès and he follows in the footsteps of his late father and his brother.
The festival features pageantry, masquerade balls and drama as well as lavish dinners and community street celebrations.