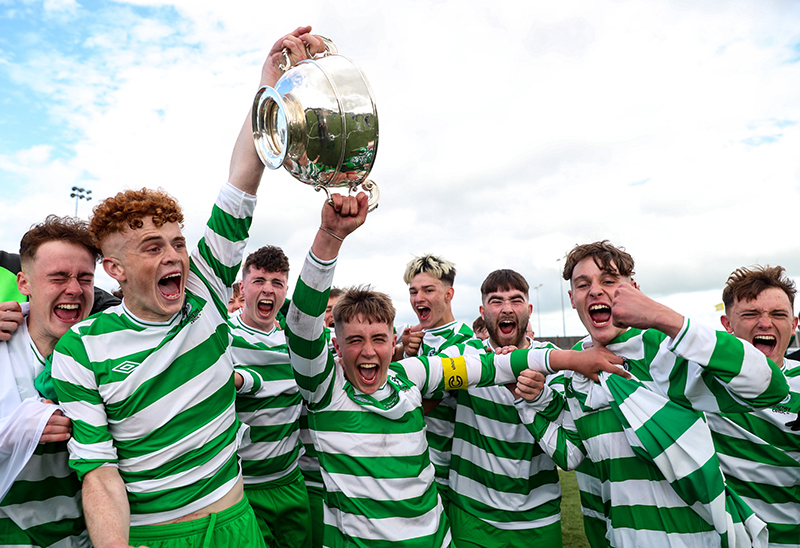 Killarney Celtic have reached the Promised Land. After years of close calls and hard luck stories, at both senior and underage level, The Celts have finally secured the national soccer title that they craved so badly. And they couldn’t have done it in more spectacular circumstances.

Sunday’s FAI Youth Cup final was played behind closed doors in line with COVID-19 restrictions but everyone watching online was treated to one of the most dramatic games of football you are ever likely to see.

Celtic came from behind twice and then took a 3-2 lead late on before their opponents, Douglas Hall, snatched an equaliser in the 94th minute to force extra time.

After two goalless 10-minute periods, the match went to penalties and the Killarney side eventually emerged victorious thanks to the heroics of goalkeeper Adam Carey, who made three saves, and Emmett O’Shea, who coolly stroked home the winner.

It was an unforgettable game and Celtic manager Matt Keane says he went through “every emotion under the sun” over the course of a gripping 110 minutes plus penalties.

“It was unbelievable. It must have been the best game of soccer ever played in Mounthawk Park in Tralee. It was up and down, we were behind and we were ahead… It was crazy. When we conceded that 90th-minute goal, I felt like crying myself.

“But we got the boys in and we tried to pick them up, and luckily we got over the line in the end.

“It was great to win the shootout because we’ve been unlucky as a club with penalties in the last few years.

“If anyone deserves the credit, it’s Adam Carey. That man is training seven nights a week. He hasn’t missed a session all season and he has been doing extra training with Mike Gustafik. He’s a great lad.”

“Emmett was actually supposed to be third and someone else was fifth, but I switched them because I just knew Emmett would score the last one.

“He’s as cool as a breeze. You could even see it with his celebration. Not a bother to him.”

Most of this talented squad will now move on to adult football and while Keane would like to see them graduate to the Celtic A team (where he could play alongside them), he feels as though they should have loftier aspirations than that.

“I would be hopeful that they go on to pay for Celtic of course – in one or two years you could put that entire team in for the seniors – but I can see some of them doing more than just playing for Celtic. Some of these guys could easily play League of Ireland.”

But that’s all ahead of them. For now, Keane, his players and his backroom team of Jerry Falvey, Conor McCarthy, Diarmuid Daly and Stefan McMahon will bask in the glory of the club’s first ever All-Ireland crown.

“We sat down at the start of the year and we set ourselves the goal of winning a national tile. We’re delighted that we managed to achieve it and I think it was well-deserved.

“This is a phenomenal group of lads.”