Kerry’s Golden Years (Part 3): ‘It’s not our fault if we wreck the game’ 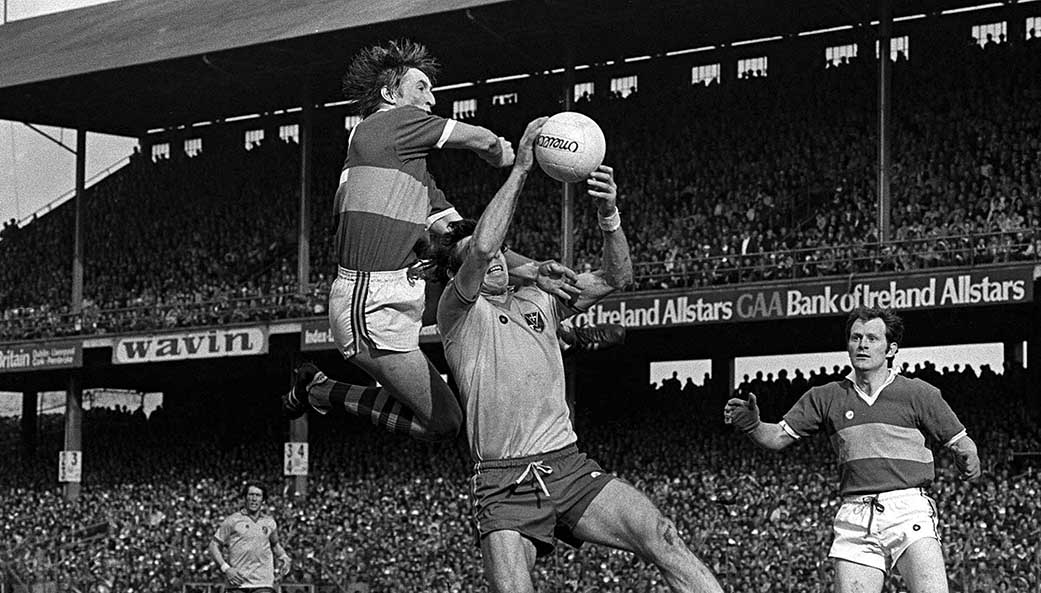 A new decade, same old Kerry. In Part 3 of our Golden Years series, Adam Moynihan dissects The Kingdom’s bruising triumph over Roscommon in the 1980 All-Ireland final.

It was an unlikely rivalry. The two counties were, after all, at opposite ends of the honours list. But make no mistake about it: the teams contesting the first All-Ireland football final of the eighties did not see eye to eye.

The enmity between the Kerry and Roscommon players of this period is said to have started back in 1978 when the Connacht champions hosted The Kingdom in the final of the U21 championship. For some reason, apparently through no provocation or bad behaviour by the players in question, the home supporters engaged in some unsavoury chanting that was targeted at Beale clubmates Ogie Moran and Bomber Liston.

Choruses of “Ogie is a moron” and “Bomber is a monkey” didn’t go down too well with the visitors, and it also probably didn’t help that Roscommon halted Kerry’s bid for four-in-a-row at U21 level the same day.

With conditions poor and perhaps a few old scores to settle, it should have been no surprise that the senior final of 1980 descended into a battle, although the spectacle was undoubtedly more unedifying than anyone could have anticipated. Writing for the Irish Press, Peadar O’Brien concluded that “the best thing about this match was the final whistle”.

He wasn’t far wrong, but, for Roscommon, things could have been profoundly different.

As the teams marched out behind the Artane Boys Band, a large primrose and blue banner poked out above the Croke Park crowd. It read: “When Jigger dances – Kerry reels” and just 39 seconds after the throw-in, the prophecy was fulfilled.

John ‘The Jigger’ O’Connor capitalised on some stellar work by Tony McManus to palm the ball past Charlie Nelligan in the Kerry goal and the underdogs were in dreamland. Point by Séamus Hayden and John O’Gara followed and with just 12 minutes played, Roscommon, who were hoping to bring Sam Maguire back west for the first time since 1944, led by five points to nil.

The champions, playing into the wind and missing influential full forward Eoin Liston (appendicitis), were in danger of falling apart.

The ever-dependable Mikey Sheehy settled things down with a free and captain Ger Power, who would be forced off at half-time due to a recurring hamstring injury, fired over a cracker moments later. Then came the sucker punch that knocked Roscommon back on their backsides.

With 20 minutes on the clock, Tommy Doyle found Pat Spillane who cut like a knife through the heart of the Roscommon defence before playing in Sheehy. Kerry’s scorer-in-chief drew the goalkeeper and popped a handpass over his head. All of a sudden, the holders were level.

It was yet another goal from the hand that typified Kerry’s style of play during this era, a style that had no shortage of ardent critics the length and breadth of the country.

Just weeks earlier, Kerry had defeated Offaly by 4-15 to 4-10 in the All-Ireland semi-final and just one of their four goals came via the boot. Writing for the Irish Independent, Donal Carroll called it “an utter abuse of the handpassing rules”, which at the time allowed for various examples of striking motions that would not have been allowed in the decades preceding or succeeding the Golden Years. Of course, scoring a goal directly from the hands has since been outlawed entirely.

For his part, Mick O’Dwyer knew that Kerry were very good at moving the ball through the hand and he had no intention whatsoever of bowing to public sentiment. In fact, O’Dwyer would instruct one of his forwards – usually Spillane – to throw (quite literally) a dodgy handpass in the opening minutes of a game to see how the referee responded. If the pass was allowed, that was that. Kerry would toss the ball around like the Harlem Globetrotters so long as it worked to their advantage. Which it invariably did.

Referring to the GAA’s decision to allow more leeway when it came to handpassing, O’Dwyer was heard to remark: “If they want basketball, we will give them basketball”.

“We will win everything for as long as we can and after a few more years, they can have it,” he is quoted as saying in Owen McCrohan’s brilliant book ‘Mick O’Dwyer: The Authorised Biography’. “It’s not our fault if we wreck the game. We are like Liverpool in soccer.”

Now, after Sheehy’s latest fisted effort against Roscommon, they were well on their way to “wrecking the game” further still.

After Roscommon’s lightning quick start, the first half rather fizzled out and the sides went in level, 1-3 apiece, at the break. The match was being ruined by constant flaking and fouling on both sides, although to borrow from the parlance of baseball, Roscommon did seem to be alone in swinging for the fences.

Sheehy gave Kerry their first lead of the game in the 38th minute and Spillane fisted over soon after to make it a two-point game. Charlie Nelligan denied John O’Connor from close range with a superb reflex save and the Rossies subsequently missed two kickable frees. On another day, they could have entered the final quarter with a healthy lead.

As it was, points by Mícheál Finneran and O’Connor (free) levelled matters with 12 minutes to go but midfield powerhouse Jack O’Shea responded with a big score at the other end. Then came a hugely important incident.

With Nelligan stranded after racing out and crashing into the onrushing Finneran, the ball broke kindly to Roscommon half forward Aidan Dooley who looked certain to score. His marker, Páidí Ó Sé, had other ideas. Ó Sé dived at the boot of Dooley and somehow not only prevented the goal, but also held onto the ball. Dooley proceeded to effectively kick the prostrate Kerryman over the endline but, thankfully for Kerry, the danger had passed. Roscommon didn’t raise another flag for the remainder of the game.

A pair of Sheehy frees sealed a three-point victory as Kerry claimed their first three-in-row since the forties.

In his acceptance speech, Ger Power thanked Roscommon for a “good, clean game”. It was a throwaway comment that any winning captain would make but, in this instance, it drew uproarious laughter from the thousands of Kerrymen and women huddled below the Hogan Stand. The match had been anything but clean – there had been 64 frees in total – and O’Dwyer made no secret of his disdain for Roscommon’s approach when he and his soldiers landed back in Killarney.

“Ways and means to dethrone the present Kerry side are being tried throughout the country,” Micko said, “and those who do not have the skill must resort to other tactics. This was tried yesterday and we came out on top, and, no doubt, we will do so again next year.”

KEY MOMENT Páidí Ó Sé’s remarkable block on the line in the 61st minute prevented a certain goal and stands out in a game that was largely bereft of individual brilliance at the attacking end of the field. Roscommon would have taken the lead at a crucial juncture were it not for Ó Sé’s intervention and that could very well have spelled the end for Kerry’s three-in-a-row hopes. The following morning, Mick O’Dwyer congratulated his heroic half back on his save. “That was tírniúlacht,” Ó Sé replied. “Love of country.”