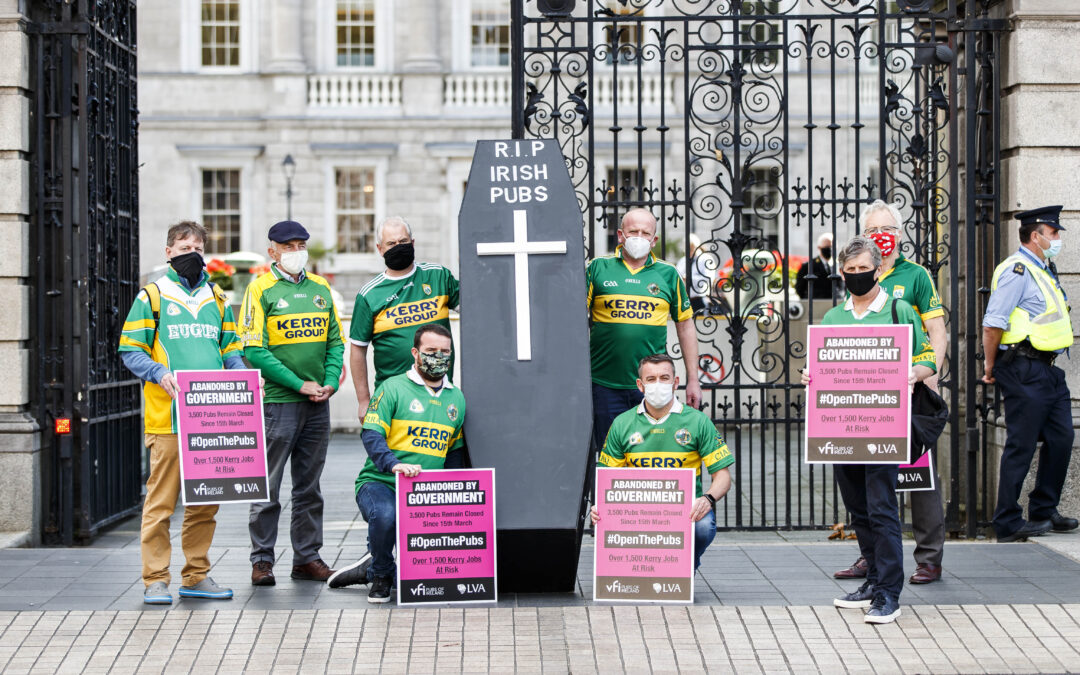 Publicans from across Kerry gathered outside Leinster House today (Wednesday) to protest the death of rural pubs. They say that unless Government brings forward meaningful supports pub culture will all but disappear from Ireland.

The publicans carried a coffin to the gates of Leinster House to symbolise the death of the rural pub, while supporters from the county looked on. While pubs will be allowed open on September 21, Kerry publicans say huge problems remain within the sector.

Tralee publican Aidan Turner, who attended the protest, says the trade will need Government support if it’s to survive.

“We organised this protest to highlight the fact we’ve been closed for six months with little or no support from Government. Until a vaccine is found we will have to trade at half capacity, which for many pubs is not viable.

“Pubs are central to our culture and if Government is serious about protecting our sector they will have to increase the grant aid to pubs over the next 12 months, increase the duration of the commercial rates waiver until next summer and commit to enhancing the employment wage support scheme.

“Kerry pubs are loved by tourists from around the world and when they return, which they will, we need to ensure there are pubs here for them. This is about survival until this pandemic is over. Today’s protest is a clear message to all the politicians that publicans, their families and staff demand more support.”

All Kerry TDs met with the publicans during their three-hour protest, including Minister for Education Norma Foley, Brendan Griffin, Michael Healy-Rae, Danny Healy-Rae, and Pa Daly.