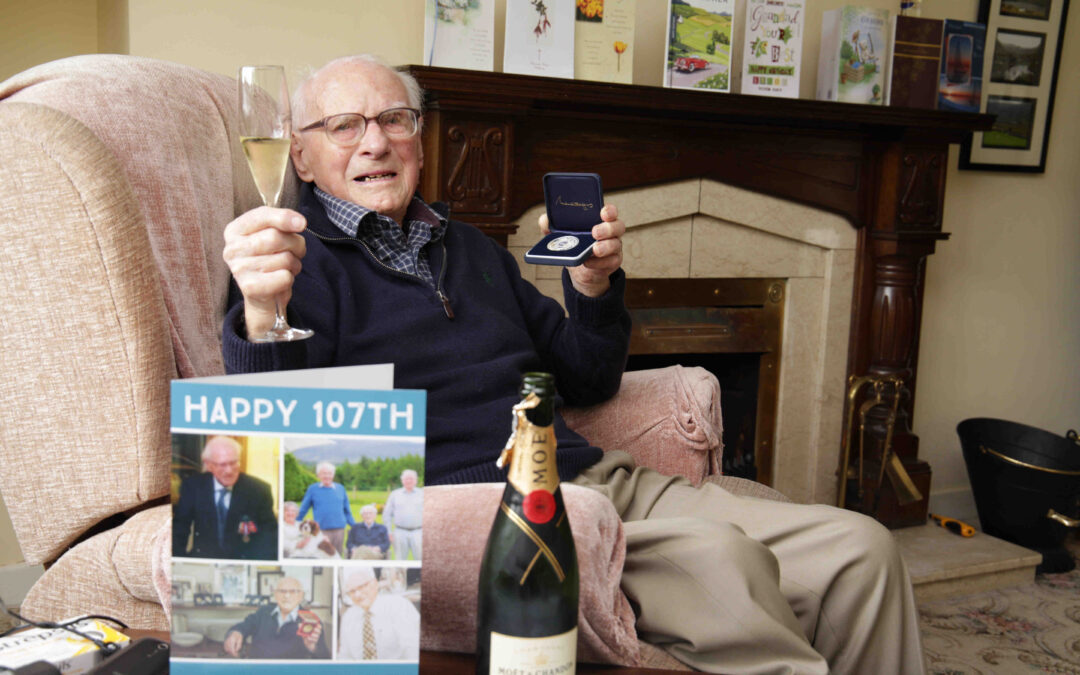 Not only is he the oldest man in Killarney or even Kerry – but Michael J O’Connor – who celebrated his 107th birthday on Tuesday – is Ireland’s oldest man!

And it’s a title he’s very proud of – as he wasn’t expected to live past the age of six after contracting the Spanish Flu. But after months in bed he eventually recovered. Unfortunately his mother Bridie, a teacher in Glencar, succumbed to the illness some months later. His father Daniel, also a teacher in Glencar, died in his 40s.

On Tuesday, the champagne was flowing at his home in Muckross, and there were so many cards that he hadn’t had time to open them all!

Not many can say that they have experienced the War of Independence, the Civil War, World War One and Two – but Michael, who worked at sea and then went onto a career in aviation, also remembers the only mode of transport being a horse and cart to get from his home place to Killarney for shopping – to later in life experiencing the contrast with two trips on a Concord to New York.

Michael also went from using the social media of the day – Morse code – in his early career, to later learning to how to send text messages.

Today he says he’s agile and “thankfully comfortable” and enjoyed all the well wishes, cards and presents including his seventh medal from the president.

“107 years ago I kicked myself into this world,” Michael told the Killarney Advertiser this week.
“I was born in Glencar to Daniel and Bridie, I travelled the world for five years, three in the last war. I then changed to aviation in the early ’40s and stayed in aviation for the rest of my life based in Ballygreen between Shannon and Ennis.”

“I built a holiday home up the side of a mountain a few years before I retired. Then, when I retired, I sold the house in Limerick and have been here ever since. There’s no nicer place in the world – and I’ve been around most of it!”

SECRET TO A LONG LIFE

Michael let the Killarney Advertiser in on a little secret, saying he puts his longevity down to a daily glass of whiskey.

“The secret is a glass of Red Breast Whiskey every night before bed,” he said.

With COVID, he thinks it’s very unfair that it has happened but feels people should do as they’re asked and stay within the confines of their home as much as possible.

These days he is enjoying his time with his family and watching the History Channel on Sky – and not many can say they have lived through most of it!