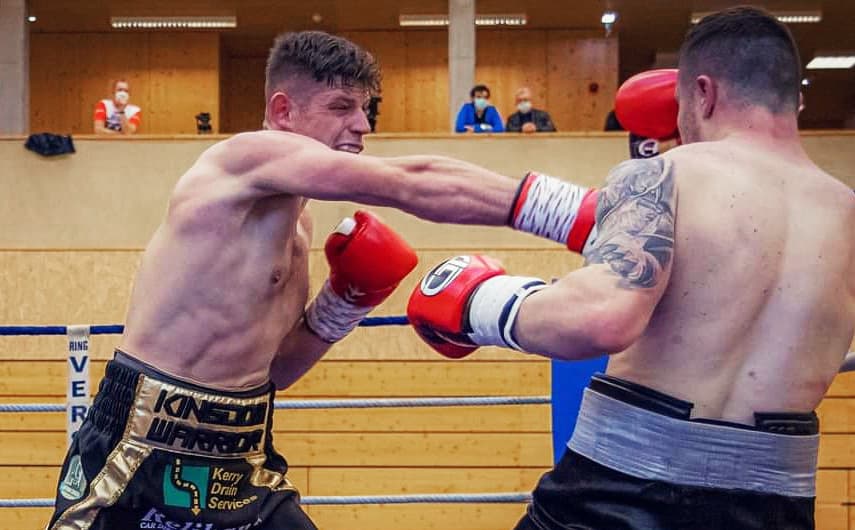 Kerry light heavyweight boxer Kevin Cronin has set his sights on national glory after his fourth round TKO victory over Boris Mrkonjic in Luxembourg.

The Milltown native was hoping to get six rounds under his belt against the Bosnian on Saturday but his opponent could only manage three before crying off with an apparent shoulder injury before the start of the fourth.

It was another comprehensive win for the Kingdom Warrior and speaking to the Killarney Advertiser this week, he said he was happy with his display.

“I thought I performed very, very well. Firstly, judging myself, I know I can perform a lot better, but I also proved to a lot of people the level that I am at. The reaction that I’m getting to the fight and how I boxed is unbelievable. Irish-Boxing.com have mentioned that I’m ready for the step-up to big fights at 3-0, so obviously I’ve done something right. But I have a lot more gears to go through.”

Mrkonjic came out swinging, which came as a surprise to Cronin, but the Kerryman showed good composure to take control of the bout.

“I expected him to start off a bit cooler and then get behind his boxing and try to take me out. But he really came out of the traps – he was looking to knock me out from the get-go. I knew he was going to be a big fella but I did expect him to be that solid. He was a huge light heavyweight.

“The gameplan worked out perfectly. I stayed out of the danger zone and I showed that I’m not just a puncher, I’m a boxer. He was coming to take my head off and I kept him at range. I stood out when I needed to stand out. The main part of the gameplan was to keep a busy jab, and I did that, and to keep picking them jabs to the body, and I did that as well. It started taking a toll on him and it was setting up the bigger shots at the end of the second round. In the third round then when I started applying the pressure, the tank was starting to run empty just from them little jabs to the mid-section.

“I didn’t expect to take him out ‘til later to be honest. I was hoping for the full six rounds and I thought he’d bring me there because he’s a tough fella. I thought he would drag me to the fifth or sixth round before I’d find an opening. But the gameplan went so well, I got the opening a bit earlier and got him down in the third.

“He was complaining about a shoulder injury but, to be honest with you, watching back the footage, there was nowhere where he actually got injured. I think he was just looking for a way out at that stage.”

Cronin’s is expecting another foreign fight in June, but he remains optimistic of a home event, possibly in Killarney, in the medium term.

“The fight I want is not a certain person,” he said. “I want to fight for the main titles in Ireland, which are the Celtic and Irish titles. I want to do the traditional route, and I want to go on to the European after that. So, whoever is holding those titles, I’m coming for them.

“And if Taylor McGoldrick wants it in the meantime, he can have it.”