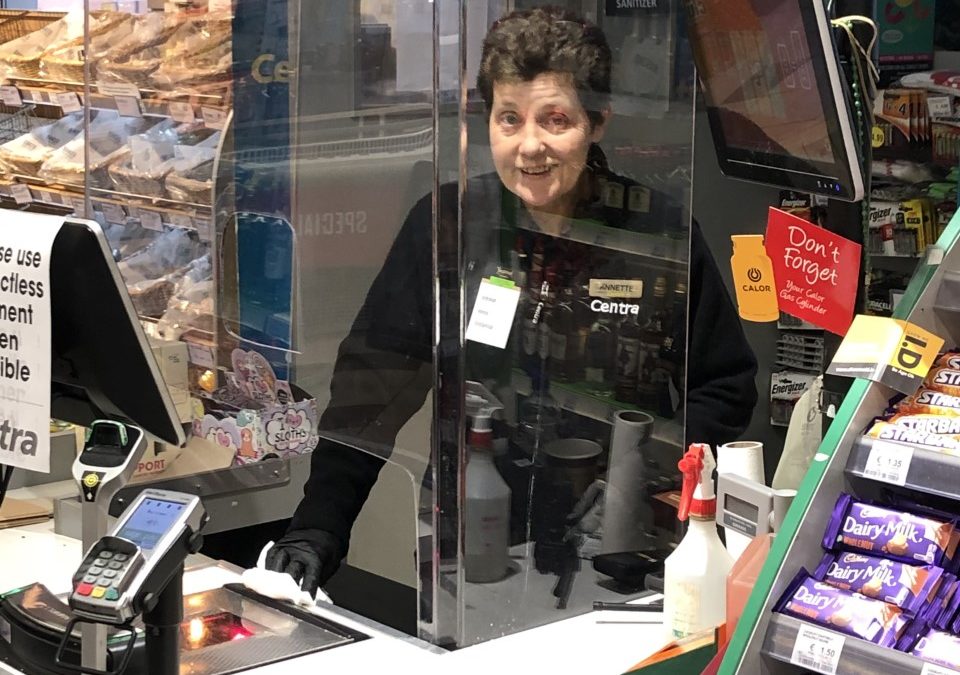 SCREENING: Annette O’Shea working behind one of the new Perspex screens installed at Moriarty’s Centra, Farranfore on Monday.

A protection screen that was first installed in a local supermarket to protect both staff and customers could be rolled out nationwide.

Moriarty’s Centra in Farranfore installed a Perspex screen at their points of sale on Monday morning.

The screen was fitted by local engineering firm John O’Connor Welding and Engineering Works in Currow at short notice.

Shop owner Mike Moriarty was looking for a way to protect both his staff and customers while also implementing the new social distancing rules brought about by COVID-19 restrictions that were put in place across the country last week.

He contacted the local engineering firm at 8am on Monday morning and the protection screen was completely installed by 11am that day.

“It immediately raised the morale of staff who were concerned about working closely with people while this ugly thing is around,” Mr Moriarty told the Killarney Advertiser.

“This is about protecting staff and making customers more comfortable in the current crisis. This protects the person behind the till and the person outside the counter.”

The screen caught the attention of the Musgrave Group, the official wholesale suppliers of all Centra and SuperValu stores in Ireland.

“The managing director of Musgraves was on to me first thing on St Patrick’s Day, a day he should not have been working, and wanted to know all about it,” added Mike.
“It looks like every Centra could be getting one. I know the shop in Currow got one shortly after me.”

Moriarty’s Centra has taken other additional steps amid the current crisis including marking one-metre distances on the shop floor on the approach to the sales counter. Trolleys and shopping baskets are washed once an hour and staff placing products on shelves are surrounded by barriers to give them extra space to work.