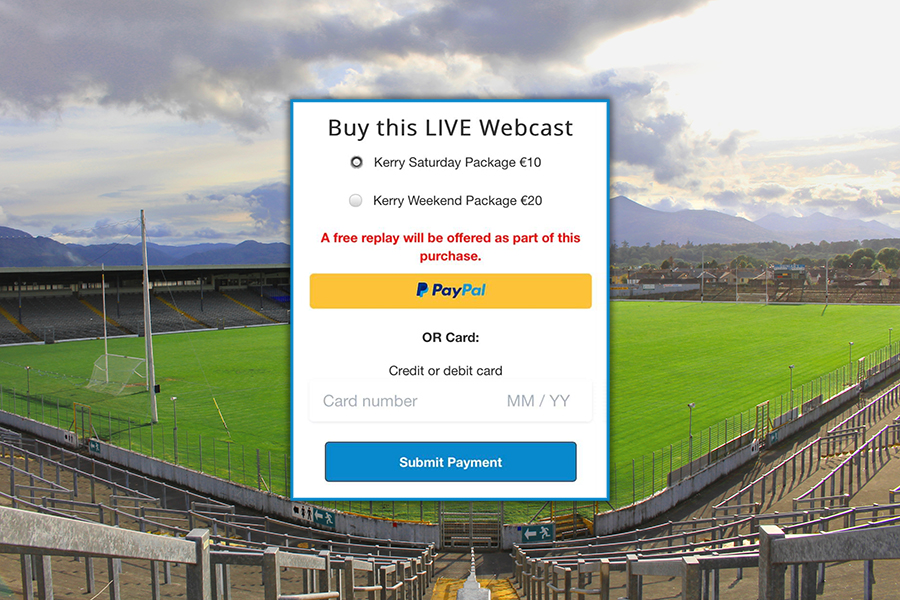 Kerry GAA have defended the cost of their Senior Football Championship live streams after supporters criticised their pricing policy online.

With spectators unable to attend sporting events due to COVID-19 restrictions, the County Board have been streaming matches via third party websites at a cost of €5 per game.

This weekend, all four Kerry SFC quarter-finals are being streamed by Kerry GAA, but some supporters have taken issue with the price of the newly introduced day and weekend passes that are being marketed by the County Board.

Day passes for Saturday or Sunday, covering two matches each, can be purchased for €10. A weekend pass costs €20.

Clearly, this does not represent a discount but speaking to the Killarney Advertiser today, Kerry GAA PRO Leona Twiss says it was never marketed as such.

“With the weekend pass, it was never even suggested that it was a discounted price,” she said. “It wasn’t at all. It was to ease the work involved in making the transaction.

“We received a lot of comments over the last couple of weeks from people who didn’t want to be putting in their details multiple times for three or four games per weekend.

“We’re trying to simplify the system so if you want to watch four games, it’s just a quick transaction – you don’t have to put in your card details each time.

“The pass was never advertised or marketed in such a way that it would save money.”

Some supporters also raised concerns about the packaging of fixtures in pairs, which means that it is no longer possible to purchase one individual match for €5.

Fans must now buy either a day pass for €10 or a weekend pass for €20, regardless of how many matches they want to watch.

“If you were going to a double-header in Tralee or in Killarney, you would pay a double-header price,” Twiss said. “You couldn’t pay to go into one game and then come out.

When it was put to her that selling individual tickets for double-header games would pose logistical problems in real life, and those same problems do not exist online, the Kerry GAA PRO explained that this weekend’s double-headers are actually two streams as opposed to four.

“We’ve bought that period of time (the duration of the two matches plus the break in between) from the streaming company. It is substantially more expensive for us to shut it down and restart a new stream.

“There’s an awful lot of money in that.”

“It’s rare that you see a quarter-final of a County Championship for €5. Cork, I know, are free to air, but we’re very competitive in terms of price point and in terms of value. If there was a way of reducing the price, we would certainly look at that.

“And you are talking about multiple members of a household watching it together on a device, whereas if they were going to the game it would be substantially more expensive.

“We would certainly be of the opinion that it is providing value for money.

“Tim Murphy has been clear from the start: this was never run as a money-making initiative. We really just wanted to cover the cost in such a way that we could provide the games for as big an audience as possible.

“It would be impossible for us to stream the games for less than €5 per game. It is a costly operation.”

Will Kerry GAA make a profit out of it?

“It’s very hard to know. This weekend, for example, we have paid for a higher spec package and it will cost us substantially more than previous weekends. We are now incorporating interviews before the game, action replays and multiple camera angles. We got equipment flown in from London last Tuesday that will stabilise the images even more.

“Each weekend we have taken the initiative to invest more money to improve the quality of the product. Each stage has cost more but we have never increased the price point.”

Meanwhile, a number of season ticket holders have complained that they have to pay for the live streams in the first place. They feel as though the streams should be covered by their annual passes, which, under normal circumstances, would have granted them free admission to any club matches they wished to attend.

Twiss said she was unsure if it was “feasible” to give season ticket holders the streams for free, but she added that the County Board will be taking their concerns into consideration.

“We are barely covering our costs at the moment. This weekend we might not even reach that point because of the equipment we got sent in from England. If we were to give the stream out for free to [season ticket holders], would that be feasible to run? I don’t know.

Tomorrow, Dr Crokes go up against Templenoe at 2pm followed by Kenmare Shamrocks versus Mid Kerry at 4pm.