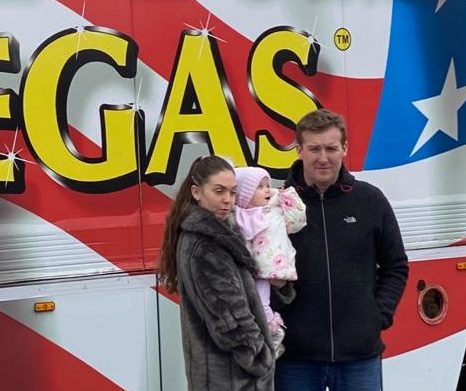 BACK ON THE ROAD: Stephen Courtney, his wife Teresa and baby Cora are bringing their drive-in circus to Killarney.

Killarney is going to be one of the first stops as one of Ireland’s oldest circus returns to national touring this week.

Circus Vegas, which has been stranded in Tralee since the start of the national shutdown in March, will resume touring this week after staging several drive-in performances in the county town over the last week.

This week, Circus Vegas, which is operated by a branch of the Courtney Family, one of Ireland’s longest-serving circus families, will visit Listowel ahead of a three-day visit to Killarney between August 7 and 9.

Stephen Courtney, who is a third generation circus performer and artist, said he and his staff were overwhelmed by the generosity of the people of Kerry after their unexpected and extended stay in the county.

He also said that the current tour through the county is a way of saying thank you to the people of Kerry and that he does not expect or intend make a profit from it.

“We travel all over Ireland, Scotland, England, Germany. I have never seen anything like it. You won’t beat the people of Kerry anywhere in the world,” he told the Killarney Advertiser.

“They came every day, some just to say hello and to see are we alright, they baked cakes for us, dropped off a pint of milk. The response to our drive-in has been great, it is not about making money, this is about getting the show back on the road.”

An exact venue for the Killarney performances has yet to identified. It was hoped that the circus would take place in a field off the Muckross Road, but recent heavy rainfall may force a re-think on that site.