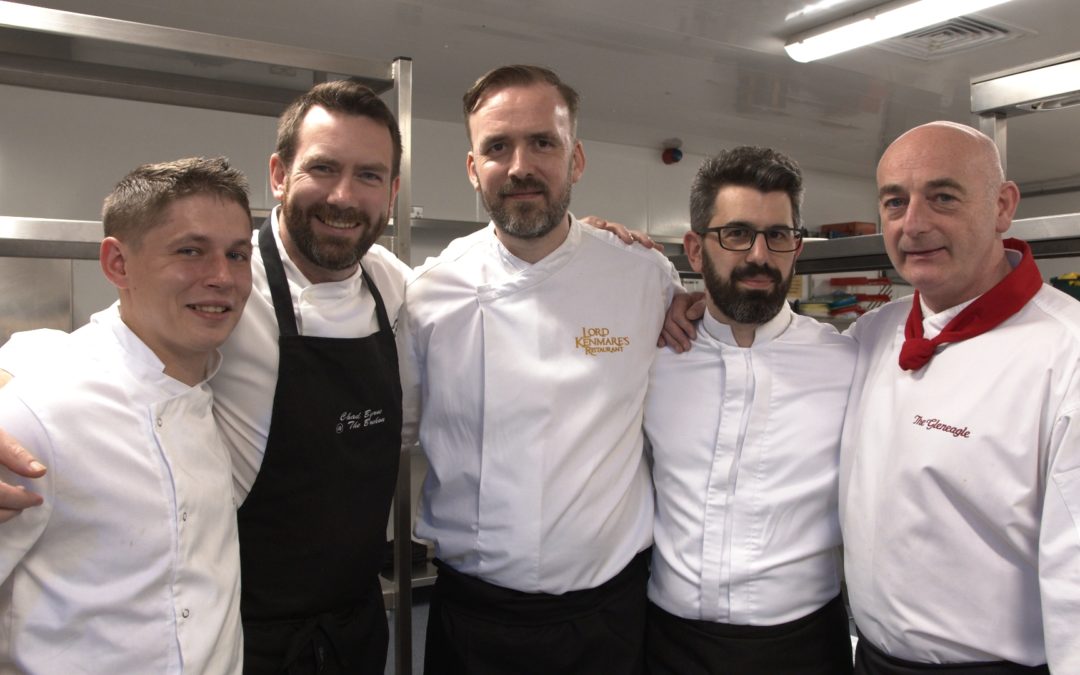 HELPING OTHERS: Pictured a number of weeks ago at the County Cooking Championships before being temporarily let go from their jobs are five of the seven Killarney based chefs, Dan Moynihan, Chad Byrne, Simon Deegan, Cyrille Durand and John Drummond, who plan to cook nutritious meals for the most vulnerable during the health crisis.

A number of Killarney based chefs who have been temporarily let go from their jobs are pooling their skills and knowledge to help those most vulnerable.

And in a bid to stay busy and keep themselves in a positive frame of mind they decided to offer their skills to the community.
Now they’re planning to help one Meals on Wheels group who are trying to cope with the surge in demand for their services.

Chad Byrne, who is Head Chef in the Brehon, said losing their jobs temporarily was a shock but they knew due to the health crisis Ireland is experiencing that it was coming.

“The whole hospitality sector knew it was imminent – but it was still a shock,” Chad told the Killarney Advertiser this week.

“We wanted to stay in the right frame of mental health by staying positive and helping the community that needs it most under safe conditions in line with the HSE. I’m fit, able and ready to go and I’ve gathered a team of seven chefs.”

He said they tried one local group but at that time they didn’t need any volunteers. He had heard Tralee Meals on Wheels were in desperate need of volunteers so they’re now planning to travel over and split days between them.
“I’m looking forward to it. I’ll be back in the kitchen where I feel most at home and it’s a rewarding thing to do.”

Timmy Hickey from Flesk Meats has also volunteered his refrigerated vans for delivery, he added.