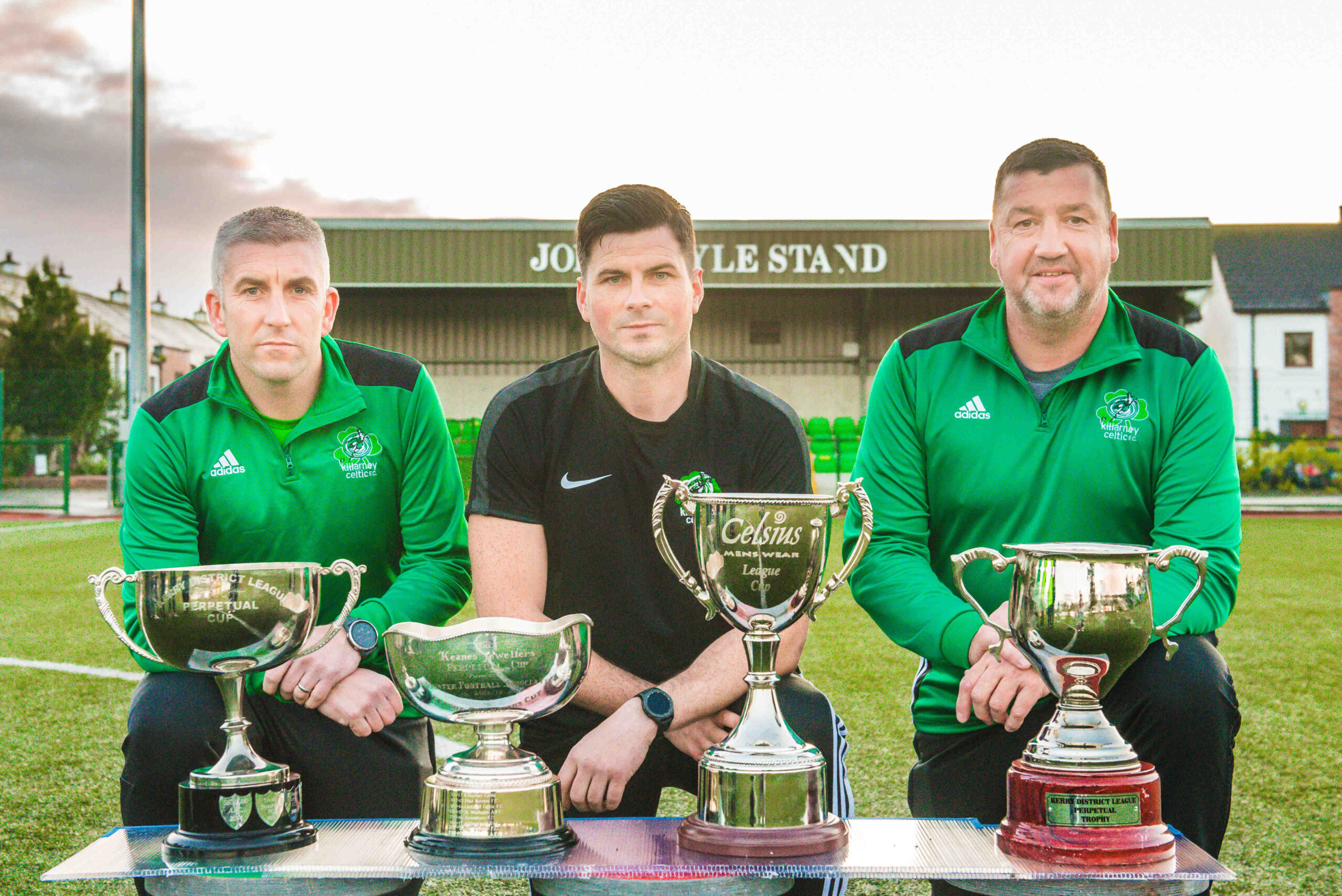 All that glitters might not usually be gold – but the silverware currently on display at Celtic Park in Ballydribeen certainly reflects a truly golden season in the proud 44-year history of Killarney Celtic Football Club.

In what has been the most successful season in the club’s history – which has just drawn to a close – in terms of dream achievements, it just couldn’t have got any bigger or better for the club at all levels with a haul of trophies and successes that was totally unprecedented in Kerry soccer.

Leading by example, the senior team won the Premier A Championship and the Greyhound Bar KO Cup double for an incredible third year in a row, once again proving absolutely invincible under the direction of astute manager Brian Spillane.

In addition to that remarkable achievement, Celtic clinched the Munster Champions League – having competed against some of the top sides in the province – and in a novel all-Celtic final, the club’s A team overcame the challenge of the B team in the Celsius Menswear Cup decider. And it didn’t end there.

Having won the Jimmy Falvey Memorial Cup and the keenly contested Denny Youths League in convincing fashion, the club’s swashbuckling youths team created their own wonderful chapter in the annals of Kerry and Irish soccer when they registered a dramatic FAI Youth Cup final victory over fancied Cork side Douglas Hall in a tension-filled penalty shootout.

This season will be remembered as the greatest ever in the history of Killarney Celtic with so many triumphs to celebrate, so many cups to hold aloft and so many achievements to be proud of.

Progressive club chairman, Paul Sherry, said the success story is due mainly to the priority given to the underage policy over the years with several hundred players, in all age groups, turning up for training.

“There is great dedication shown by everybody involved in the club, from the officials, the coaches, the backroom teams, the parents and, of course, the players and the enthusiasm shown week in and week out is just infectious,” he said.

“We have just completed a remarkably successful season and that is to be celebrated but we remain hugely ambitious and we still harbour a great desire to win the elusive FAI Junior Cup after coming so close in recent seasons,” Paul added.

Amusing as it might seem now, the Celtic story started at a Wolfe Tones concert with the seeds for the birth of a new soccer club in Killarney sown to strains of ‘A Nation Once Again’ in a packed Gleneagle Hotel ballroom.

Pals Mikey Daly, from O’Connell’s Terrace, and Billy Healy, of Dalton’s Avenue, were enjoying a night on the town 44 years ago when the talk turned to the beautiful game.

“Billy was playing with Pretty Polly and I was with the Franciscan Youth Club and we decided over a few pints that we’d form a club,” Mikey, later recalled.

A common belief that the fledging club took its name and its colours from Glasgow Celtic are well wide of the mark, however.

“Killarney already had an Athletic and a Rangers so Celtic was the first name that came to mind,” Mikey said.
The first set of jerseys weren’t green and white hoops either, rather a fetching shade of yellow.

“We bought them in Jimmy O’Brien’s sports shop for 33 punts. We went for yellow simply because it was all he had,” Mikey said.

Renting playing space in local fields for years, Celtic eventually acquired its own base and Celtic Park is now one of the finest grounds in the south west, befitting of the most successful club in Kerry soccer.

And such is the progress that is being made, it’s safe to assume that the best has yet to come.