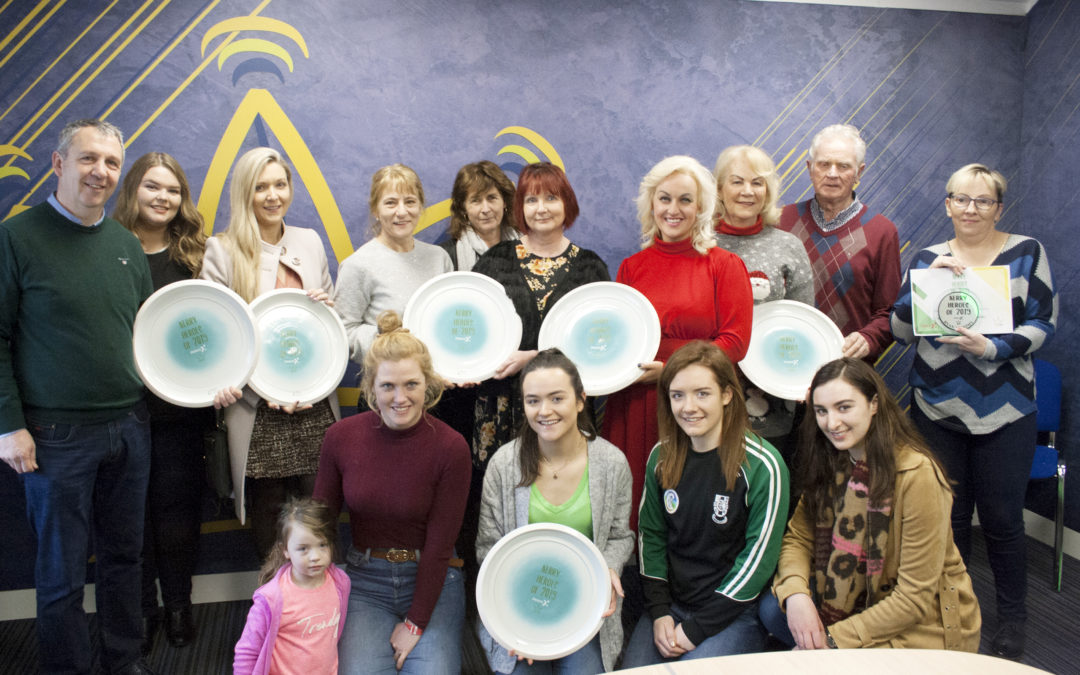 KERRY HEROES: Winners of the Radio Kerry ‘Kerry Heroes Awards 2019’ were presented with their awards recently.

A Ballyspillane husband and wife who adopted five children after their parents died in a car crash have been named as one of the ‘2019 Kerry Heroes’ by Radio Kerry.

Margaret and John Quilligan were nominated by Sylvia Coffey who said the couple wouldn’t allow the family be broken up.

“When I was 10, my parents were killed in a crash leaving five of us, from the age of 12 down to nine-months-old orphaned,” Sylvia said. “My aunt and uncle took us in, they wouldn’t allow the family to be broken up. I can’t begin to tell you the happiness and love we felt in that small house because of them,” Sylvia’s nomination.

The Killarney family were one of seven individuals that were announced by the local radio station as Kerry Heroes for 2019.

Dr Patricia Sheahan and the staff at UHK Palliative Care Unit, were nominated by Haulie and Carol Liston, and by Denise Murphy.

The Kerry camogie team were nominated by Kathleen Fitzgerald who wrote: “Two All-Irelands from this very disciplined and dedicated panel. The final whistle in Croke Park provided memories that will never be forgotten.”

Ryan Murphy, aged 10, was nominated by Joanne Morgan who praised the Ballyduff boy for raising money for Kerry Hospice and Palliative Care. He wanted to honour his late dad, Jim, who spent his last weeks in palliative care.”

The Kerry Senior Football Team and Peter Keane were nominated for uniting the county, giving us belief and making everybody proud to wear the Kerry jersey.

Laura Fitzpatrick nominated her father Jack. She said it was because he “spearheaded a campaign to stop the closure of St Mary of the Angels residential facilities, so his son, my brother Bernard, and other residents could stay in their home. He formed a parents’ and relatives’ association which helped raise over €400,000 to improve and maintain St Mary of the Angels.”

The State of Mind mental health organisation nominated its co-founder in Ireland, Dr Susan Mary Lawlor for her continuous efforts to help raise awareness of mental fitness throughout GAA clubs in Kerry and in the county’s community at large. Dr Lawlor co-founded the organisation in Ireland with her late brother Dr Martin Lawlor.

The winners were presented with specially commissioned original awards created and sponsored by Louis Mulcahy Pottery.