Back to the future for Knockaderry pupils today (Friday) 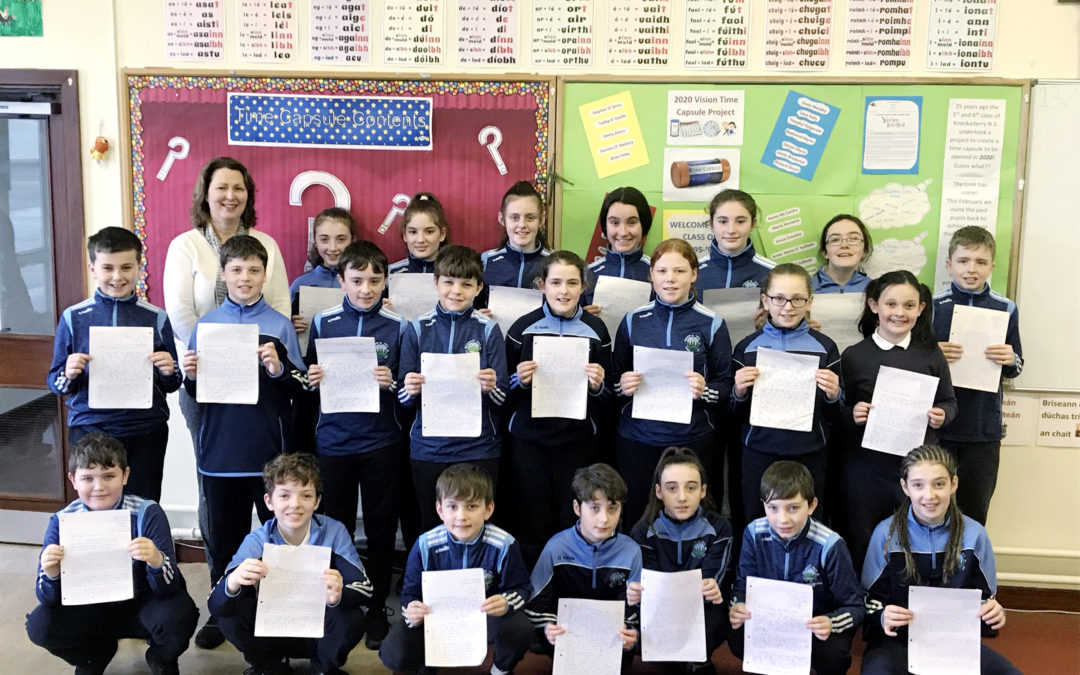 LOOKING TO THE FUTURE: The current Fifth and Sixth pupils from Knockaderry Farranfore NS with their letters to their future selves in 25 years.

A time capsule set to be re-opened today (Friday) will be like stepping back in time – 25 years in fact – at Knockaderry National School.

On this day in 1995, the Fifth and Sixth class pupils stored an array if items including letters to their future selves as well as popular items of the time, interviews with locals, and a scale model of the village the pupils constructed at the time, as part of the ‘2020 Vision Time Capsule Project’.

Over the years village changes include the school moving from where it once stood at the location of where Liam Lynch Motors now stands to a new building which was opened in 1998. It was also renamed Knockaderry-Faranfore National School at this time.

Moriarty’s Centra was not yet opened – but Mike and Margaret Moriarty’s daughter Maria was one of the pupils involved in the project. The current kebab shop was also O’Neill’s Grocery Store.

The project was the brainchild of current school Principal Aine Daly, who had just started teaching at the Farranfore school.

“I know a lot of the pupils are both nervous and excited about reading letters to their future selves,” Aine told the Killarney Advertiser this week. “I often wondered if it was forgotten about, but one family was visiting their son in Boston over Christmas and he was asked if it was ever going to be reopened.”

The event at the time was sponsored by local branches of the Bank of Ireland and the Knockaderry NS capsule was retrieved from the Castleisland branch’s vault earlier this week ahead of its grand-reopening today.

“We recorded interviews with local characters and people working in local business like the airport, train station and mills,” Aine said. “Today’s kids would never have used a tape recorder.”

The school made every effort to contact former pupils to invite them to the reopening and while they contacted the majority of past pupils, Saturday’s General Election allowed them make contact with the few remaining families.

Many of the past pupils or close family relatives would have cast their vote the school and staff were able to meet many of them personally on Saturday to offer the invite. As a result nearly all of the 23 children that were involved in the project will be at today’s event.

“Many of my pupils back then would have their own children going to the school now,” Aine added. “Over 70 schools in Ireland took part but I am not aware of any that has the same continuity as us.”

Current pupils at the school were encouraged to embrace the project too. They have been asked to predict what might be in the box.

“The current pupils are rehearsing the songs of the day, Oasis, ‘Don’t Look Back in Anger’ to perform today,” added Aine.

Today’s event will close with the current pupils adding their items to the capsule and returning it to the bank’s fault where it will remain for another 25 years – and it will include a copy of today’s Killarney Advertiser!

« Away Days: The long trip to Edendork with Kerry’s most loyal supporters
Kerry release new blue and lime away shirt »