An interview with Con Houlihan (Part 1) 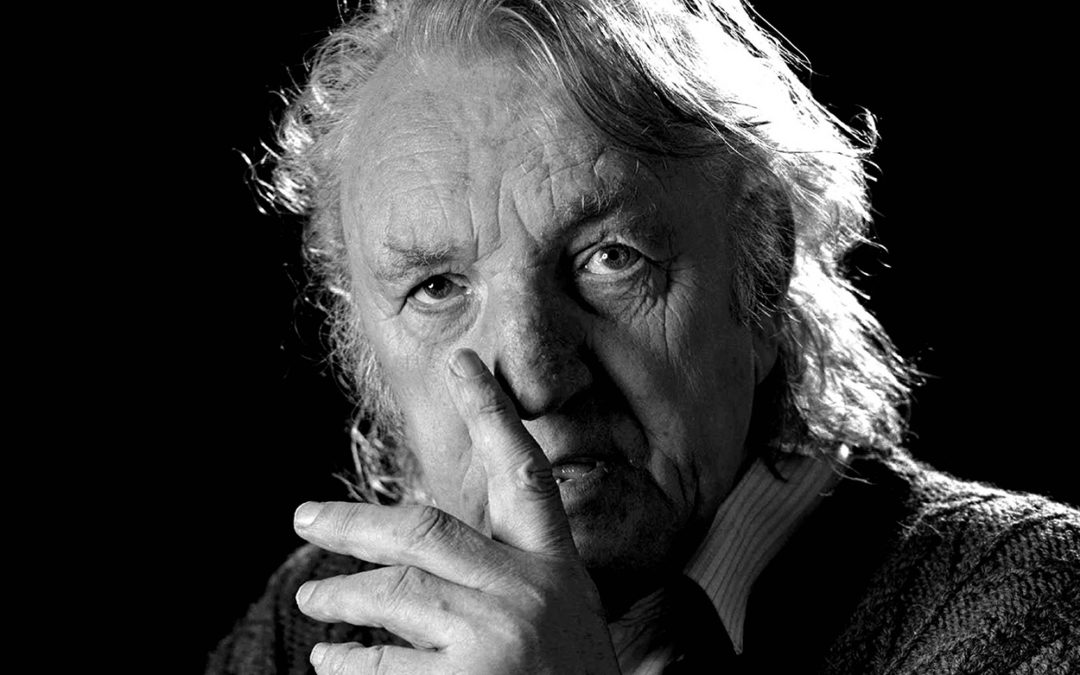 In January of 2012, just a few short months before his death, legendary Kerry sports writer Con Houlihan sat down with Killarney Advertiser sports columnist Eamonn Fitzgerald for a wide-ranging conversation. In Part 1 of a two-part interview, Con speaks about his writing methods, his childhood in Castleisland, and his favourite ever Kerry players.

Dublin has a special attraction for me. Very regular journeys to Croke Park for well over half a century has been part of it.

Less regular, but very enjoyable also, were the visits to Lansdowne Road, Dalymount Park and its offshoots, Glenmalure Park, Tolka Park, St Pat’s of Inchicore and Home Farm. Leopardstown, Harold’s Cross and other sports venues had their own attractions. Sport apart, the country’s capital is home for many of my friends.

Dublin is home from home for one such great Kerryman: Con Houlihan, originator of “arise Knocknagoshel and take your place among the nations of the earth”. He was 86 years old a short time before Christmas. Con was very much part of my interest in sport, particularly when Dublin in the rare auld times was also home from home for me.

Wasn’t it Yeats himself in ‘Among School Children’ who wrote about what he thought the impressions schoolchildren had of him when he was visiting them as a senator.

“A sixty-year-old smiling public man. With sixty or more winters on its head.” Con has 86 and he has aged, of course, physically. The huge frame in the mighty big anorak (long before it became Bertie’s trademark) that I met so often at the Canal End, or in Jimmy O’Brien’s on Munster Final day, was no more. It has been a good spell now since we met. Time to head for Dublin.

His eyes narrowed when I entered the hospital ward. “Who have I now?”

“Éamonn Fitzgerald.” Silence for all of nine, maybe 10 seconds at a stretch.

“1972, Offaly. Replay”. The mind was as sharp as ever, as I discovered over the next two hours.

He had five of that day’s daily papers in front of him. The day was still young, about half-ten at most, yet at that stage he had spent several hours reading their contents.

“Where are your glasses, Con?”

“I never had them in my life and I don’t need them now either,” he replied, and the first of many twinkles illuminated his visage. The best of wine was rising to the top, like beaded bubbles winking at the brim. His favourite tipple of late is brandy and milk. Something to do with sustenance, he explained.

Like thousands of other sports lovers through the decades, I eagerly awaited the Evening Press hitting the streets in mid-afternoon on the Monday after the All-Ireland final. What would Con’s perspective be from his vantage point at the Canal End? He avoided the Press Box. He preferred to be on the terraces, with the plain people of Ireland. In the press box, journalists can be cocooned, somewhat adrift of the atmosphere generated by the spectators. Furthermore, there are several games being played and action replayed in the minds and bodies of the partisan supporters on the terraces. Con was among them.

That’s why readers waited for Con’s report. It would be different; it always was. Other scribes wrote to a formula of mainly factual account of the battle for Sam. Not so, Con.

“Did you write your column, directly after the match, Con?”

He was off and you knew best not to interfere with a classical wordsmith in a stream of consciousness, so beloved by Joyce, that great Dub. “After the match I went drinking, to Mulligan’s in Poolbeg Street and to many other hostelries as well, and I was in no hurry home. I started penning my thoughts at 4am on Monday morning. That’s when I do all of my writing. My thoughts are clearest at that time of the day.

“That goes back to growing up in Castle Island (his preferred spelling). My father was an early riser and would be up at that time; he had to be. He worked in the creamery and he had to get the steam up for the creamery with timber and turf. Some years there was damn bad turf and that was no easy task.

“My brother Jerry, sister Marie and I were well used to going to the fairs early in the mornings, driving cattle and pigs to Castle Island. They’re all dead now, God be good to them. We lived one mile north of Castle Island on the main road to Dublin. There’s nothing there now.”

He wrote everything long hand for the newspapers, but told me he turned to the laptop in modern times. “Sure, you can learn anything.”

“Castle Island hasn’t forgotten you, Con, and neither has Kerry County Council,” I told him. “When they built that spanking new road and roundabout to bypass the town, they gave it your name.” The eyes danced, the chest rose visibly. No need for words, the body language said it all. Pride, satisfaction, and the realisation that his own people cherished him, loved him for what he is, and has been; it defied that dictum that no man is a prophet in his own land. He savoured the honour. Also of course his bust is in the main street in the town he loves so well. The sculptor captured well his eccentricities. You can see his habit of covering his hand over his mouth.

“I was very shy growing up, conscious of my size, and that was how that came about.”

Time for a little ‘sos’ and then we’re both away on the magic carpet, with the wind beneath our feet. He’s away in a hack.

“I wasn’t great at the football myself, but I did play senior colleges football at midfield when I was only 14. I went to school in Castlemartyr and to Tralee CBS. Sport is very important in the lives of people and never more so than now. With all the bad news and such negativity, sport can be the great escape. Not just for the hour of the game, or the short minutes of the greyhounds rounding the final bend in Shelbourne Park, but all the talk before and after the events.

“Mícheál Ó Muircheartaigh is right: sport is life itself, a great escape when we need to escape and then there is the unpredictability of it all, just like life. His eclectic range of sports provides the artist with a wide canvas to explore and the gentlest of hints is enough.”

“I spent one year in England and spent many short stays there to visit Anfield, Epsom, Aintree, Cheltenham and other places covering great sporting occasions. The English are very fine people and I have fine memories of that country.

“Arkle was a mighty champion. I can still recall those great moments in the Gold Cup with Arkle and Mill House. They both fought a great battle up that hill in the closing stages. Ireland v England. The Irish contingent went stone mad when Pat Taaffe brought Arkle past the winning post. Arkle was great and was so consistent. He never ran in the Grand National because his owner was too fond of him and was afraid he would get injured. I knew Pat very well.

“Then there was Dawn Run and John Joe O’Neill, how he battled back from so many jumping mistakes and beat them all. Shergar, of course, was also great. I patted him on the way in after winning in Epsom. What happened him at the end we will never know. The strange thing about him for a thoroughbred horse was that he had four common looking feet like a plough horse, but he had a great heart.

I suppose Jackie Kyle was the best I saw in rugby. I played rugby myself with Castle Island, Currow and Killarney and I found it great. In rugby you are involved in the game all the time, whereas in football you could be out of the play for long periods.”

And that leads us nicely into the greats of football. Jog the memory.

“Mick O’Connell was supreme, a wonderful stylist. Jack O’Shea of course. What a man, you could play him everywhere and anywhere. When the team was struggling Jacko would turn up anywhere and lift the siege. He had a strong engine and heart to burn. Still in Iveragh and you have to mention your own name sake, Maurice Fitzgerald. He was a classy player, a real stylist, a great forward and you could play him at midfield also.

“Colm Cooper is the best forward I have seen. He’s a genius; he sees things and opportunities that no one else sees. He operates by instinct and often he gives the impression that even he himself doesn’t know what he will do next. He sees things no one foresees; just a quick shimmy and he is away.

“He is very brave and has a wonderful left leg. Great players who are ‘ciotógs’ have a big advantage. It is very hard to hook a great left-handed hurler. Same in tennis with McEnroe and Connors.

“It broke my heart that such a great player was denied the honour of captaining a winning Kerry All-Ireland team.”

Above: Journalist and author Con Houlihan in November of 1996. Pic: Ray McManus/Sportsfile.