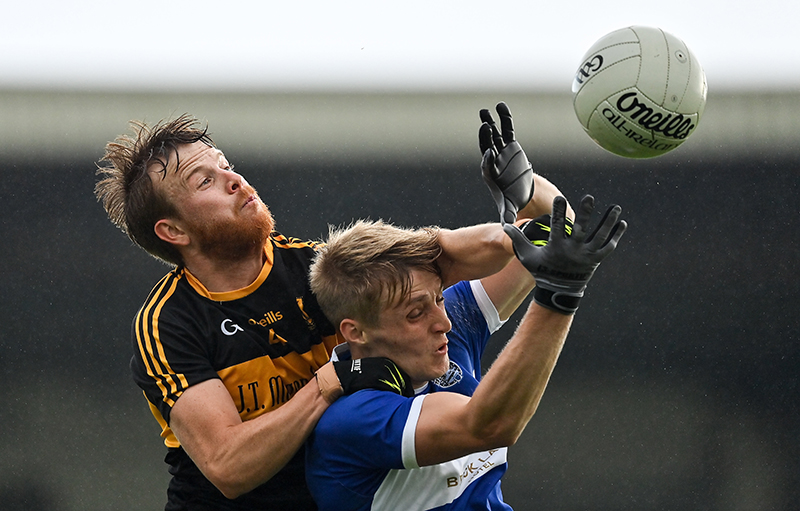 Round 1 is in the can and the return of championship football was enjoyed by all who (by hook or by crook) bore witness to one or more of the 28 games that took place over a hectic opening weekend.

With only 200 people allowed inside the ground in these pandemic-affected times, ticketless supporters stood on cars, scaled walls, retreated to higher ground and perched themselves in the buckets of diggers just to catch a glimpse of the action.

Unusual atmospheres aside, there was some great entertainment, not least at senior level where three of the four matches went right down to the wire. With so little to separate the sides, particularly in Group 2, we should be all set for another exhilarating round of top-flight football.

The predictions were fairly good by me last week – I had an easy win for Crokes (although it turned out to be far easier than I expected), Legion by two and a draw between Stacks and Dingle – so I should absolutely quit while I’m ahead. But sure look, where’s the fun in that?

(This match is being streamed by Kerry GAA. Purchase your stream here.)

Last week was a baptism of fire for the newcomers and, perhaps unsurprisingly, they got fairly badly burned. Some very strong performances in Division 1 of the County League in recent years suggest that Templenoe are capable of competing at this level on their day, but last Friday was not their day.

To be fair to them, things could have been quite different had Adrian Spillane’s thunderous 24th-minute strike gone in instead of cannoning back off the crossbar. That would have levelled the match at 1-3 to 0-6 and who knows? Maybe it would have put the frighteners up the opposition. As it turned out, Crokes pulled away, as Crokes tend to do when you don’t take your chances against them.

This upcoming match will provide them with an opportunity to get back on the horse and they will need no geeing up in what is sure to be a feisty match-up against their near neighbours.

Shamrocks did extremely well to come from behind and beat Strand Road in their first outing. Veteran forward Paul O’Connor stole the show in the first half, first with a spectacular solo goal (my “gushing” tweet describing his remarkable effort was quoted in Monday’s Irish Examiner as they named it Goal of the Weekend), and then with a gorgeous cross-field assist for Stephen O’Brien.

O’Brien’s goal was the only indelible mark he left on the game before his withdrawal in the second half, presumably due to injury. If the rapid half/corner forward is out for an extended period it will be a huge blow to Kenmare’s championship prospects, not to mention Kerry’s.

Perhaps the only player more pivotal to Kenmare’s chances is Seánie Shea and he proved his worth to his club yet again with another superb showing against Rahilly’s. Yes, he’s athletic. Yes, he’s intelligent. Yes, he’s a beautiful footballer. But what makes O’Shea stand out for me is his seemingly limitless appetite for the game, as well as his undying will to win.

You see it in the way he steps to his Kerry teammates at club level. There are no smiles, no jokes, no “well lad, how’s the form?” It’s aggressive, in-your-face, hand-in-the-chest, take-no-prisoners marking. You get nothing easy off him on the pitch, even if he’s your friend off it.

When the game was in the mixer the last day and his side desperately needed a score, O’Shea was the one who forced the turnover when the ball should never have been turned over in a million years. He was the one who, out of sheer doggedness, singlehandedly fashioned the opportunity. He was the one who swung over the equalising score that rocked Rahilly’s to their core. And he was the one who scored the winner deep into time added on.

Whether or not he can guide Kenmare to a final remains to be seen but victory over Templenoe would set them up nicely.

After a disappointing 2019, the Crokes would have been very keen to lay down a marker in the first round of this year’s Club Championship and they did exactly that with a convincing win over Templenoe.

Their perennial scorer-in-chief Tony Brosnan was in typically deadly form, registering 1-8 (1-5 from play) and generally being unmarkable for the full the 60 minutes.

David Shaw scored five points (0-2 from play) and Micheál Burns added three more while very solid defensive displays from John Payne, Michael Moloney and Fionn Fitzgerald kept Templenoe quiet at the other end. Midfielder Mark O’Shea also gave a very good account of himself up against an intercounty-standard opponent and his assist for Brosnan’s goal was top class.

Brian Looney worked tirelessly, Johnny Buckley did well, Shane Murphy’s kickouts were excellent… The Crokes were ominously impressive all over the pitch, and all this without influential forwards Daithí Casey and Kieran O’Leary, both of whom are out with injuries.

This praise does, however, come with a caveat: Templenoe were quite poor. With Tadhg Morley absent and fellow county men Gavin Crowley, Adrian Spillane and Killian Spillane more or less nullified by their opposite numbers, the Intermediate champs offered little by way of resistance. Stephen O’Sullivan kicked a couple of nice scores in the first half but apart from that, they never really got going.

Once Brosnan clinically finished that goal chance three minutes before the break, the result was never in doubt.

One worry for the Crokes the last day is that they displayed some uncharacteristically poor decision-making in front of the posts. On a couple of occasions they shot for goal when a point was the better option or vice versa… It certainly wasn’t vintage Crokes in that regard. Perhaps, on occasion, the cool heads of Casey and Leary were missed. It mattered little on the day – they won by 11 anyway – but it is something that Edmund O’Sullivan and his management team will want to right. Bigger challenges lie ahead, starting with Rahilly’s in Killarney this evening.

For Rahilly’s part, they could (and, realistically, should) have won their first game of the competition but a lack of composure down the stretch cost them dearly. Thanks mainly to some excellent kicking by Jack Savage (0-10, 0-2 from play), they led by one heading into stoppage time but a costly turnover allowed Kenmare to seize the momentum and they ended up conceding three points on the trot.

Losing Tommy Walsh to injury in the first half was a big blow and with Barry John Keane having an off day and youngster Conor Hayes being well-marshalled, their attack appeared to be quite tame. On more than one occasion, Savage soloed the ball back and forth across the 45-metre line, waiting for something to materialize ahead of him (his teammates might argue that he held it for too long), but nothing did.

Major improvements will be required in that department if they are to trouble the Crokes and the availability of Tommy Walsh will be key. Judging by the way he exited last Saturday – early, of his own accord and without receiving any treatment – it would be surprising if he has recovered in the space of six days. And at the back, if they cough up early goals like they did against Kenmare, they can forget about the reaching the final.

Based on last week alone, it’s hard to look past the home team in this one.

(This match is being streamed by Kerry GAA. Purchase your stream here.)

Talk about fine margins. When Conor Keane gathered and slung a snapshot more or less over his shoulder in the dying embers of last Saturday’s tetchy Round 1 clash against Kilcummin, it looked for all the world to be going nowhere fast. A Kilcummin defender immediately got a hand to the strike, which not only diverted the course of the shot but also took the sting out of it too.

Brendan Kealy strained every sinew to reach the ball as it dropped towards the top of his crossbar but all he could do was tip it upwards and, crucially, slightly backwards. He scrambled through the top of the net to knock it back over the bar and into play but the umpire said it was too late. Somehow, a point had been scored and Legion led in added time.

Sub Thomas Moriarty added the insurance score and Legion, to the great relief of Stephen Stack, went home with two points in the back pocket.

The result is obviously the most important thing but Stack won’t have been overly enthused about his team’s performance on the night. They showed determination and grit to see the game out when it could quite easily have gotten away from them but it would be an understatement to say that there’s more in this Legion team.

James O’Donoghue put in a huge shift – he was undoubtedly the player of the game – and he was feeling it by the end. He was forced off towards the very end with what appeared to be a hamstring problem and it goes without saying that Legion will need him at or at least approaching his best against Dingle.

His Kerry teammate Paul Geaney was the star of the show against Stacks last weekend; he scored 1-6, including a last-gasp equaliser that could have huge ramifications for Dingle’s season.

The men from West Kerry showed great character to come back from a five-point half-time deficit as they scored seven unanswered points to turn the tie on its head. The Geaneys (Paul, Mikey and Conor) were at the heart of the fightback – they scored all but two of Dingle’s total – and, after Stacks responded in kind, it was Paul who saved the day in the 66th minute when he levelled matters in dramatic fashion.

It will be interesting to see who Legion task with picking up the two-time All-Star. Danny Sheahan and Podge O’Connor both missed the Kilcummin game through injury so the responsibility may fall to powerful full back Damien O’Sullivan but, realistically, it will take a concerted effort from Legion’s backline if they are to stamp out Geaney’s influence.

This has the makings of another close game. It could come down to a kick of a ball.

Kilcummin were really up for last weekend’s match against Legion. You could see it whenever they forced a turnover or won a duel – they weren’t shy about getting up in an opponent’s face and making themselves heard. And the aggression almost worked. They came mightily close to causing an upset and securing the opening day result they so badly craved.

Kevin McCarthy is a massive loss for Dan Leary’s side and losing Kieran Murphy in first half stoppage time was another cruel blow, but they rallied extremely well and in the end they came mightily close to snatching a result.

Putting the ball over the bar didn’t come too easily for them in Round 1. Noel Duggan’s free-taking was excellent – he kicked five in total – but apart from that, Paul O’Shea (0-3, two from play) was the only other starting Kilcummin forward to find the target. The team scored 1-3 in total from play and they will be fully aware that such a tally is unlikely to win you many games at this level.

It won’t get much easier for the East Kerry club against reigning champions Austin Stacks, who will be desperate to pick up two points having missed a golden opportunity against Dingle.

Even with the reduced capacity, home advantage could be an important factor.